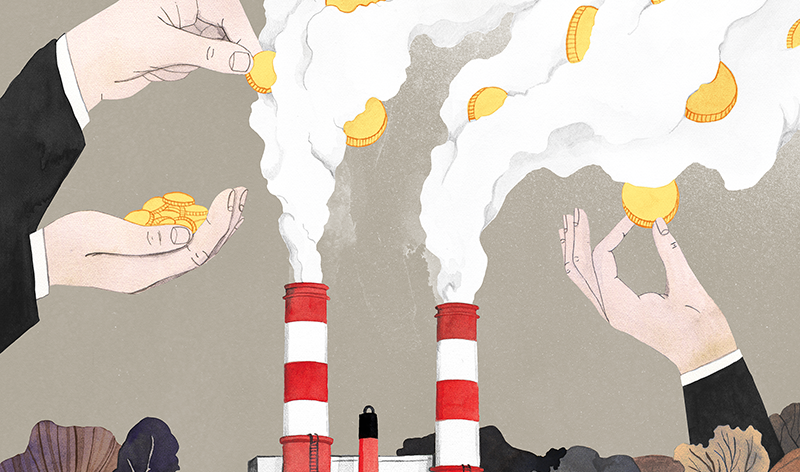 Why We Need a Carbon Tax, And Why It Won’t Be Enough

It feels as if we may be getting close, or at least closer, as a nation to putting some kind of price on global warming pollution.

Bernie Sanders campaigned all year on a straight-up carbon tax, and though Hillary Clinton hasn’t signed on to that, her team on the Democratic Party platform committee did agree to compromise language calling for pricing carbon and methane to reflect their “negative externalities.” (Full disclosure: serving as a Sanders representative on the platform committee, I put forward the tax resolution on his behalf, and, after it failed, put forward the language on carbon pricing.)

Meanwhile, Exxon — weighed down by investigative journalists showing it lied through its corporate teeth for decades about climate change — seems to be putting at least a little lobbying muscle behind its long-standing theoretical call for a carbon price. It’s true that the House Republican caucus voted unanimously (with one abstention) against a carbon tax, but since a great many of them are in essence employees of the fossil fuel industry that stance could shift quickly. Pressured by the Paris agreement, the American Petroleum Institute, which is the polite way of saying Big Oil, has recently formed a “task force” to “revisit the industry’s long-held opposition to taxing greenhouse gas emissions.” Meanwhile, devoted activists from the Citizens Climate Lobby have been working steadily to erode opposition among individual Republican officeholders, a noble, if so far quixotic, task.

Oh, and the Trump candidacy just might be Titanic enough to return control of the U.S. Senate to Team Democrat, whose likely captain — majority-leader-in waiting Chuck Schumer — has begun making serious noises about carbon pricing as a revenue source for a strapped government.

There is a very real sense in which this is good news. I’ve been arguing for a price on carbon since, oh, 1989, when I wrote the first book for a general audience on what we then called the greenhouse effect. I would estimate that I’ve said in roughly 3,000 speeches some variant of the line that “it makes no sense that the fossil fuel industry is allowed to put out their waste for free, using the atmosphere as an open sewer.” And indeed it does make no sense — it’s only the historical accident that we never knew CO2 was dangerous that’s left us with this perverse arrangement where, unlike every other form of waste, it carries no cost and hence no incentive to avoid its production.

Carbon should not flow unpriced into the atmosphere, any more than you should be allowed to toss your garbage in the street.

The minute, in the late 1980s, that we started to understand the risk is the same minute that economists left, right, and center began recommending a price on carbon as the most efficient way to help us out of our predicament.

To understand why, listen to Charlie Komanoff, energy wonk extraordinaire and head of the Carbon Tax Center, testifying before the Senate in 2014:

The U.S. energy system is so diverse, our economic system so decentralized, and our species so varied and innovating that no subsidies regime, no matter how enlightened, and no system of rules and regulations, no matter how well-intentioned, can elicit the billions of carbon-reducing decisions and behaviors that a swift full-scale transition from carbon fuels requires. At the same time, nearly all of those decisions and behaviors share a common, crucial element: they are affected, and even shaped, by the relative prices of available or emerging energy sources, systems, and choices.

That’s always been the argument: Since every action of a modern life involves using fossil fuel, the only way to get enough change is to send a price signal through the matrix, so that everyone from investors to car buyers to electric-toothbrush-users will find their behavior changing automatically. It’s the one big action that encompasses all the others. As Camila Thorndike, the dynamic young leader of an effort to get a carbon price passed in Oregon, told the Democrats at their platform hearings, “As a cross-sector and market-based solution, a carbon tax empowers business to profitably transition to the clean-energy economy.” That may sound a little wonky, but she added that she and many other young women she knew were wondering whether they should have children in a world of inexorably rising temperatures. “In a world diseased with distrust,” she said, “may you find the courage to commit to this honest solution.”

So that’s the good news. And it is good news — there is no intellectually respectable reason that carbon should flow unpriced into the atmosphere, any more than there’s a reason you should be allowed to toss your garbage into the middle of the street every night. Cleaning up after yourself is a mark of civilization.

There is, however, more to be said.

In the first place, most of the carbon pricing schemes adopted around the world haven’t worked spectacularly. These so-called cap-and-trade systems set limits on carbon and allow companies to buy and sell allowances.

A carbon tax and rebate scheme should be a kind of perpetual motion machine, a virtuous cycle.

When trace pollutants like nitrogen and sulfur were the issue two decades ago, schemes like these worked well. But in the vastly larger carbon markets, with endless opportunities to game the system, the results have been mixed at best: prices have crashed, entire industries have used political muscle to win exemptions, and the net results — though such pricing plans now cover about 12 percent of the world’s emissions — have been far from earth-shaking.

A much more straightforward plan is simply to tax carbon directly. It removes the arbitraging games and artful dodges that have helped undermine cap and trade schemes in places like Europe, but in return it requires that politicians vote for… a tax. And indeed that they keep voting to raise it, year after year. The result, in the real world, is likely to be a relatively low price on carbon that then stays put — it’s hard to imagine politicians with the gumption, year after year, to hand their opponents an easy issue. Exxon, for instance, has been talking about $50 a ton — and it’s a certainty that if Exxon is talking about it, that means they’ve modeled that price to make sure it won’t put a crimp in their business. (In fact, as Exxon and the other oil majors have increasingly turned toward the natural gas business as their future, a price on carbon may nudge markets in the direction they’d want them to go.)

Probably the best hope for a price on carbon that kept going up, in order to keep the pressure on carbon emissions, is the so-called “fee-and-dividend” approach that Citizens Climate Lobby, the eminent climatologist James Hansen, and others like Thorndike, have tirelessly advocated. It sets a price on carbon, and then rebates all the revenue straight to citizens, perhaps even sending them a monthly check. Yes, the price we pay at the pump goes up, which is good, because then we ride bikes more; but yes, the check covers the increased cost. Everyone’s made whole, and if you push up the tax you push up the rebate too. It should be a kind of perpetual motion machine, a virtuous cycle.

It’s actually kind of worked in the one place it’s been tried — British Columbia, where emissions fell 19% in the years after the fee went into place. But even there politics began to drag the process down. The last increase in the tax was in 2012, and so emissions have started rising again; in fact, a new study due out this month shows that they may be rising faster than untaxed emissions elsewhere in Canada.

At best, a carbon tax is one arrow in a quiver full of other arrows we’re going to need to let loose in a volley.

Carbon rebates also come with one obvious moral and intellectual flaw: most of the damage from both climate change and air pollution has fallen on poor people, people of color, and Native nations, both in our country and around our world. They need to be treated fairly in any rebate plan. And any such rebates shouldn’t overlook the estimated nearly 12 million undocumented Americans who contribute to the economy — and cause far less than their proportional share of emissions. Environmental justice would mean a truly “fair” system compensated them for that history; it would also require policies to make sure that carbon pricing doesn’t perpetuate toxic “hot spots” in poor communities as companies look for least-cost ways to deal with the new reality. Furthermore, environmental justice demands that carbon prices don’t create a windfall on other of forms of ecological or toxic energy production, such as mass incineration or mega-hydro dams.

None of this is impossible, and the good people pushing for such schemes recognize these needs — but none of it is easy, either.

There’s one other truly grave danger with carbon pricing that zealous advocates occasionally do fall into: the idea that it’s the only thing that needs to be done. Exxon, for instance, has made it clear that the price for a carbon tax should be an end to other kinds of regulations (and probably a corporate tax cut); to bring Republicans along you’d need some kind of grand bargain that, perhaps, limited the EPA’s authority to regulate carbon, or scrapped Obama’s Clean Power Plan.

One of the temptations I try to avoid is saying, “If only you’d paid attention back then.” In 1989, back when I wrote that first book, it’s plausible that a low price on carbon, set to rise slowly over the years, would have been enough to bend the curve of emissions enough to save us from climate change. But in 2016, that’s no longer true. At best it’s one arrow in a quiver full of other arrows we’re also going to need to let loose in a volley.

We’re no longer talking about cutting emissions one or two percent a year; now, with the poles actually melting, coral reefs literally dying in a matter of weeks, and temperatures shattering new records every month, we need to do everything.

How British Columbia Gained
By Putting a Price on Carbon

We are, you might say, in a war, and if that’s the case then think of a price on carbon as the infantry. It can get things done, but it’s going to need the Navy, the Air Force, and the Marines, as well. If the climate movement stays unified around a suite of solutions, instead of resisting the temptation to grab at one, we have a chance. An outside chance, but a chance.