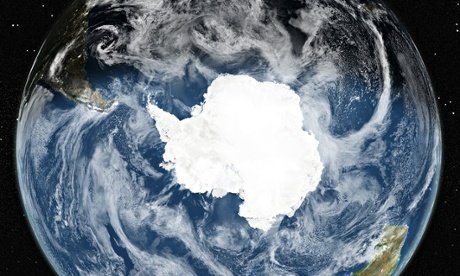 Why is Antarctic sea ice at record levels despite global warming?

“It’s not expected,” says Professor John Turner, a climate expert at the British Antarctic Survey. “The world’s best 50 models were run and 95% of them have Antarctic sea ice decreasing over the past 30 years.”

The winter ice around the southern continent has been growing relatively constantly since records began in 1979. The US National Snow and Ice Data Centre (NSIDC), which monitors sea ice using satellite data, said this week that the year’s maximum was 1.54m sq km (595,000 sq miles) above the 1981-2010 average. The past three winters have all produced record levels of ice.

This contrasts sharply with the continuing decline of sea ice in the Arctic, which again recorded below average levels of ice during the summer. The 10 lowest recorded sea ice minimums – i.e. the lowest extent of sea ice in the summer – have all occurred in the past 10 years. This decline is consistent with climate models, every one of which predicts that continued man-made greenhouse gas emissions will eventually cause Arctic summer ice to disappear completely.

“Not every location on the Earth is having the same responses to climate changes. The fact that ice in one part of the world is doing one thing and in another part ice is doing another is not surprising. The Earth is large and as the climate changes it is normal to see different things going on,” says Parkinson.

In a video made by Eco Audit reader and journalist Fraser Johnston, Dr Guy Williams, a sea ice scientist at the Tasmanian Institute for Marine and Antarctic Studies (Imas), says that even though it had fooled climate models the increasing sea ice was well understood by scientists…more