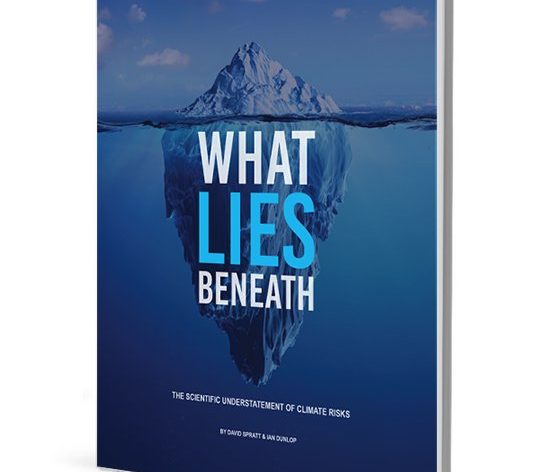 What lies beneath? The scientific understatement of climate risks

Three decades ago, when serious debate on human-induced climate change began at the global level, a great deal of statesmanship was on display. There was a preparedness to recognise that this was an issue transcending nation states, ideologies and political parties which had to be addressed proactively in the long-term interests of humanity as a whole, even if the existential nature of the risk it posed was far less clear cut than it is today.

As global institutions were established to take up this challenge, such as the UN Framework Convention on Climate Change (UNFCCC) at the Rio Earth Summit in 1992, and the extent of change this would demand of the fossil-fuel-dominated world order became clearer, the forces of resistance began to mobilise. Today, as a consequence, and despite the diplomatic triumph of the 2015 Paris Agreement, the debate around climate change policy has never been more dysfunctional, indeed Orwellian.
In his book 1984, George Orwell describes a double-speak totalitarian state where most of the population accepts “the most flagrant violations of reality, because they never fully grasped the enormity of what was demanded of them, and were not sufficiently interested in public events to notice what was happening. By lack of understanding they remained sane.”

Orwell could have been writing about climate change and policymaking. International agreements talk of limiting global warming to 1.5–2°C, but in reality they set the world on a path of 3–5°C. Goals are reaffirmed, only to be abandoned. Coal is “clean”. Just 1°C of warming is already dangerous, but this cannot be said. The planetary future is hostage to myopic national self-interest. Action is delayed on the assumption that as yet unproven technologies will save the day, decades hence. The risks are existential, but it is “alarmist” to say so. A one-in-two chance of missing a goal is normalised as reasonable.

Climate policymaking for years has been cognitively dissonant, “a flagrant violation of reality”. So it is unsurprising that there is a lack of a understanding amongst the public and elites of the full measure of the climate challenge. Yet most Australians sense where we are heading: three-quarters of Australians see climate change as catastrophic risk, and half see our way of life ending within the next 100 years.

Politics and policymaking have norms: rules and practices, assumptions and boundaries, that constrain and shape them. In recent years, the previous norms of statesmanship and long-term thinking have disappeared, replaced by an obsession with short-term political and commercial advantage   Climate policymaking is no exception.

Since 1992, short-term economic interest has trumped environmental and future human needs. The world today emits 48% more carbon dioxide (CO2) from the consumption of energy than it did 25 years ago, and the global economy has more than doubled in size. The UNFCCC strives “to enable economic development to proceed in a sustainable manner”, but every year humanity’s ecological footprint becomes larger and less sustainable. Humanity now requires the biophysical capacity of 1.7 planets annually to survive as it rapidly chews up the natural capital.

A fast, emergency-scale transition to a post-fossil fuel world is absolutely necessary to address climate change. But this is excluded from consideration by policymakers because it is considered to be too disruptive. The orthodoxy is that there is time for an orderly economic transition within the current short-termist political paradigm. Discussion of what would be safe –– less warming that we presently experience –– is non-existent. And so we have a policy failure of epic proportions.

Policymakers, in their magical thinking, imagine a mitigation path of gradual change, to be constructed over many decades in a growing, prosperous world. The world not imagined is the one that now exists: of looming financial instability; of a global crisis of political legitimacy; of a sustainability crisis that extends far beyond climate change to include all the fundamentals of human existence and most significant planetary boundaries (soils, potable water, oceans, the atmosphere, biodiversity, and so on); and of severe global energy sector dislocation.

In anticipation of the upheaval that climate change would impose upon the global order, the Intergovernmental Panel on Climate Change (IPCC), was established by the UN in 1988, charged with regularly assessing the global consensus on climate science as a basis for policymaking.  The IPCC Assessment Reports (AR), produced every 5–6 years, play a large part in the public framing of the climate narrative: new reports are a global media event.  AR5 was produced in 2013-14, with AR6 due in 2022. The IPCC has done critical, indispensable work of the highest standard in pulling together a periodic consensus of what must be the most exhaustive scientific investigation in world history.  It does not carry out its own research, but reviews and collates peer-reviewed material from across the spectrum of this incredibly complex area, identifying key issues and trends for policymaker consideration.

However, the IPCC process suffers from all the dangers of consensus-building in such a wide-ranging and complex arena.  For example, IPCC reports, of necessity, do not always contain the latest available information.  Consensus-building can lead to “least drama”, lowest-common-denominator outcomes which overlook critical issues. This is particularly the case with the “fat-tails” of probability distributions, that is, the high-impact but relatively low-probability events where scientific knowledge is more limited.  Vested interest pressure is acute in all directions; climate denialists accuse the IPCC of alarmism, whereas climate action proponents consider the IPCC to be far too conservative. To cap it all, the IPCC conclusions are subject to intense political oversight before being released, which historically has had the effect of substantially watering-down sound scientific findings.

These limitations are understandable, and arguably were not of overriding importance in the early period of the IPCC.  However, as time has progressed, it is now clear that the risks posed by climate change are far greater than previously anticipated.  We have moved out of the twilight period of much talk but relatively limited climate impacts. Climate change is now turning nasty, as we have witnessed in 2017 in the USA, South Asia, the Middle East and Europe, with record-breaking heatwaves and wildfires, more intense flooding and more damaging hurricanes.

The distinction between climate science and risk is now the critical issue, for the two are not the same.  Scientific reticence — a reluctance to spell out the full risk implications of climate science in the absence of perfect information — has become a major problem. Whilst this is understandable, particularly when scientists are continually criticised by denialists and political apparatchiks for speaking out, it is extremely dangerous given the “fat tail” risks of climate change.  Waiting for perfect information, as we are continually urged to do by political and economic elites, means it will be too late to act.

Irreversible, adverse climate change on the global scale now occurring is an existential risk to human civilisation.  Many of the world’s top climate scientists quoted in this report well understand these implications — James Hansen, Michael E. Mann, John Schellnhuber, Kevin Anderson, Eric Rignot, Naomi Oreskes, Kevin Trenberth, Michael Oppenheimer, Stefan Rahmstorf and others — and are forthright about their findings, where we are heading, and the limitations of IPCC reports.

This report seeks to alert the wider community and leaders to these limitations and urges change to the IPCC approach, and to the wider UNFCCC negotiations.  It is clear that existing processes will not deliver the transformation to a low-carbon world in the limited time now available.

We urgently require a reframing of scientific research within an existential risk-management framework.  This requires special precautions that go well beyond conventional risk management. Like an iceberg, there is great danger “In what lies beneath”.