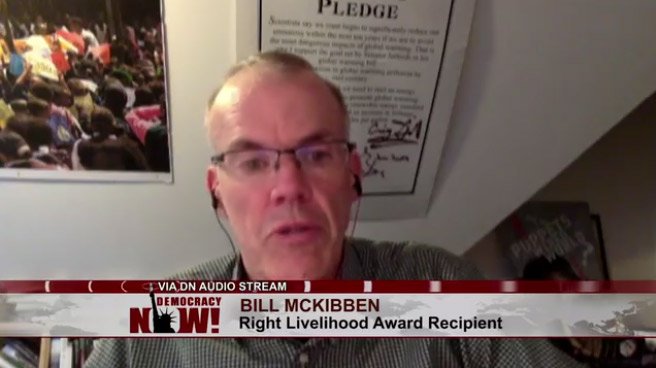 “We Have Never Had Anything Like Them”: Bill McKibben on Floods, Winds & Fires Devastating U.S.

In the Caribbean, at least 10 people have died as the historic Category 5 Hurricane Irma barrels across the Atlantic Ocean and toward the U.S. coast. Hurricane Irma is the most powerful storm ever recorded over the Atlantic Ocean. On Barbuda, 90 percent of all structures were destroyed. The prime minister, Gaston Browne, has declared Barbuda is “practically uninhabitable.” This comes as Houston, the fourth-largest city in the U.S., is beginning to rebuild from Hurricane Harvey, one of the most powerful hurricanes in U.S. history. Wide swaths of the Pacific Northwest are also on fire, as uncontrollable wildfires burn hundreds of thousands of acres across Oregon, Montana and Washington state. For more on climate change and extreme weather, we’re joined by Bill McKibben, co-founder of 350.org, from his home in Vermont. He’s the author of several books, including “Eaarth: Making a Life on a Tough New Planet.”