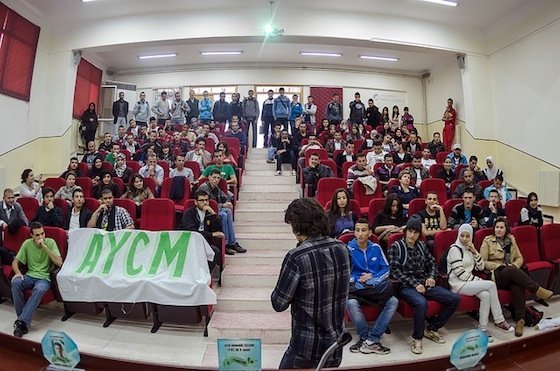 The violence of climate change in Egypt

In the midst of the revolutionary battles of recent years, it is easy not to notice that climate change is fundamentally changing the Middle East and North Africa we live in. This gradual transformation, much of it already inevitable, threatens to displace millions, if not tens of millions, and change the region beyond recognition. Business as usual will allow elite classes to profit from the devastation of the majority–but a just future is possible, if we fight for it.

The early arrival of summer this year brought with it a reminder of the violence of climate change. Rising temperatures kill, even if hot weather seems normal for the region. Heat waves like that of this May, when Cairo temperatures reached forty-three degrees Celsius, might seem irritating but innocuous. But a British hot spell killed 760 people in nine days last summer. London’s highest temperature was thirty-three degrees. How many more will die in Egypt this summer, where it is far hotter and the health system weaker? The statistics do not exist and we do not know the names of those who died, as many live on the streets and come from Egypt’s underclass.

This is about more than extreme weather events. Between 2006 and 2010, severe droughts in eastern Syria destroyed the livelihoods of 800,000 people and killed eighty-five percent of livestock. 160 whole villages were abandoned before 2011. Rising sea levels in the Nile Delta have forced farming families to abandon their homes repeatedly in recent years. In a coastal village I visited near Rasheed in April 2014, residents spoke of relocating three times as their land was washed away.

This is not nature “having its revenge.” The classist violence of climate change is shaped so that the poor carry the burden on behalf of the privileged. We do not recognize the underlying brutality, as dominant narratives render it invisible. Responsibility is diverted onto “natural” disasters and the physical landscape. Yet nobody needed to die in Cairo when the temperature dropped in December or soared in May. The deaths were the result of decisions made in London and Brussels, DC and Dubai, and more locally in Lazoghly, Heliopolis, and Qattameya. These were choices made to keep burning fossil fuels, and to protect the rich rather than the poor.