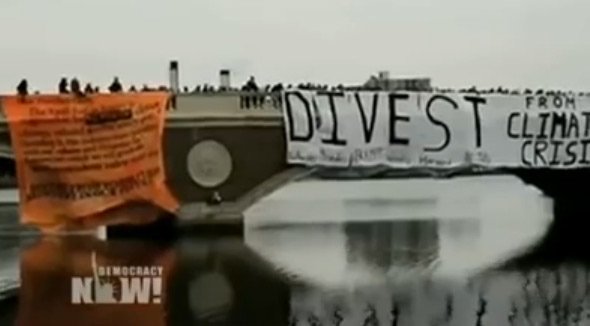 This morning’s Democracy Now! features coverage of the growing fossil fuel divestment movement, recently the subject of a supportive op-ed from Archbishop Desmond Tutu in the U.K. Guardian.

“We cannot necessarily bankrupt the fossil fuel industry,” the former anti-apartheid leader writes, “But we can take steps to reduce its political clout, and hold those who rake in the profits accountable for cleaning up the mess.”

In another segment Democracy Now! looks at a new mini-series on Showtime in which celebrities and investigative reporters travel the world exploring the impacts of climate change, Years of Living Dangerously.

In contrast to the apocalyptic vision of floods, wildfires, and drought-fueled war that Democracy Now! highlights in much of this morning’s program, the show wraps-up with a discussion of an alternative model; socialism — “not only political democracy but economic democracy,” says Michael Smith, co-editor, along with renowned literary agent Frances Goldin, of Imagine, Living in a Socialist U.S.A.

Out earlier this year from Harpercollins the anthology asks readers to do just that, imagine what American society would look like were a government in place that values people over profits. It contains numerous essays from activists and thinkers like economist Richard Wolff and political prisoner Mumia Abu Jamal.

In case you want to investigate further how all this radical dreaming pertains to the ecological nightmare we find ourselves in Imagine features a chapter on ecosocialism, written by one of its longtime advocates, Joel Kovel.