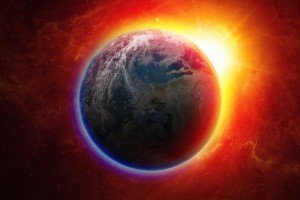 Unfortunately, The world Is still barreling towards climate cataclysm

As 2014 gets underway, humanity’s carbon emissions remain on course to catastrophically reshape the global climate over the next century or two. Global carbon emissions increased 1.4 percent in 2012, hitting an historic high of 31.6 billion metric tons released in a single year, according to a recent assessment by the International Energy Agency (IEA). The Intergovernmental Panel on Climate Change recently pegged the total amount the world can afford to emit at 1,000 billion metric tons of carbon. Beyond that, humanity has little chance of holding the change in global temperatures below 2°C — the threshold after which most scientists agree climate change will become genuinely catastrophic. The world has already blown through 531 billion metric tons of this “carbon budget,” and not using up the rest will require leaving most of the world’s already-proven fossil fuel reserves unused and in the ground.