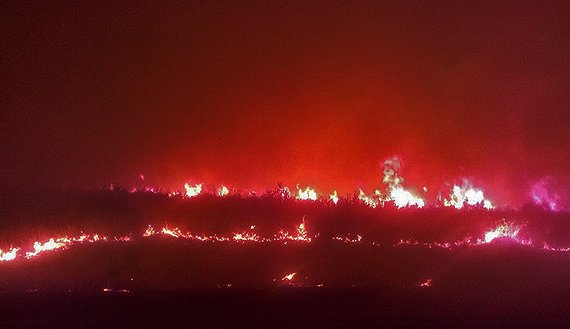 With the restart of the war in North-Kurdistan by Turkish state in end of July 2015 the Turkish Army has started to burn down forests. After 2,5 years of negotiations about the start of a peace process between the Turkish government and the Kurdish Freedom Movement, the Turkish side decided to attack the PKK Guerrilla HPG (Peoples Defense Forces) and legal political activists.

In a planned and systematic manner the Turkish Army shoots with munition and bombs which result in forest fires. Particularly in the provinces of Dersim (Tunceli), Sirnex (Şırnak) and Amed (Diyarbakır) the Army has burned down several ecologically highly sensitive forests in its operations against the HPG. Thereby the Turkish Army hopes to limit the mobility of HPG. This method in fighting the long-lasting Kurdish rebellion has been used widely already in the 90’s in North-Kurdistan. Almost every greater forest in the contested regions has been burned down in that years.

The most forest fires have been initiated in areas which have been declared by the Turkish government as “security areas” just after the restart of the war. That is why local people and activists – like from our movement – have been hindered by the Turkish Army to go to the affected areas and try to extinguish the fires. These initiatives have been created while the responsible governmental bodies did not act. We assume that they have been instructed by the government not to intervene. To date several hundred hectares of forests have been burnt down in North-Kurdistan where the main tree type is the oak.

Sources about the fires: