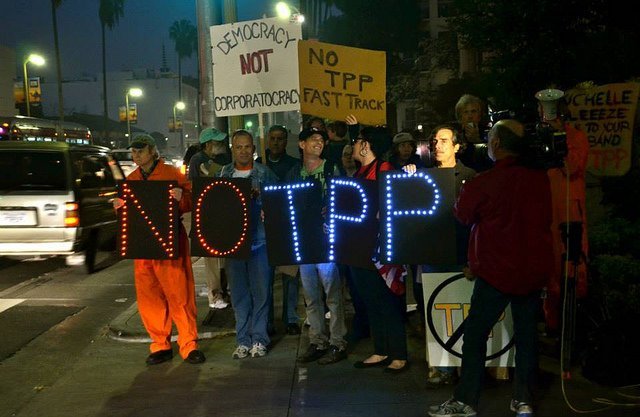 Trading away our environmental future: The Trans-Pacific Partnership

Klein says insufficient attention has been paid to the successful implementation of the neoliberal trade agenda, which began in 1988 in conjunction with a steady rise in greenhouse gas emissions. 1988 was the year the United States and Canada signed the first mega trade deal. It was also the year that climate scientist James Hansen first testified on Capitol Hill that he had a great deal of certainty there was a connection between greenhouse gas emissions and global warming. The free trade era, says Klein, has locked in a vision of the world, often referred to as “The Washington Consensus,” which saw a massive outsourcing of jobs abroad and shipping of manufactured goods all over the world. The globalized model encourages the most wasteful form of production and the results have been predictable, she says. “In the 1990s, global greenhouse gas emissions increased by 1 percent a year. In 2000, they started to increase by 3.4 percent a year on average – a significant jump.” The corporate free trade model the TPP represents, says Klein, “is at cross purposes with what we have to do to combat climate change.”

For its part, the Obama administration, along with congressional allies Sen. Mitch McConnell (R-Kentucky) and Rep. John Boehner (R-Ohio), is lobbying hard for “fast track” trade authority. “Fast track” hands over Congress’ constitutional trade and legislative writing authority to the president. Congress can approve or disapprove a specific trade agreement, but it can’t amend it or filibuster. The authority has been sought by the Obama administration since 2012. In January 2015, it still has a fight on its hands. An estimated 180 members of the House of Representatives, largely Democrats, but a handful of Republicans, have pledged to fight fast track and oppose the TPP. Earlier in January, Rep. Rosa DeLauro (Connecticut) and other Democratic lawmakers, union members and consumer safety advocates held a news conference to announce their opposition to provisions in the Trans-Pacific Partnership negotiations that would give the president “fast track authority.”