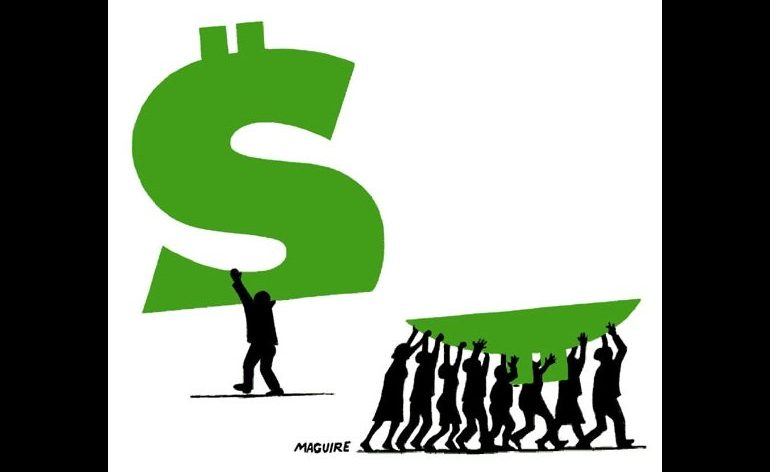 Thomas Piketty’s Capital in the 21st Century was number two in the US Amazon bestseller list last week. It nestled between a tear-jerker about living with cancer and a Disney movie spin-off coloring book for kids.

In Britain the impact has been less dramatic, but it has still featured heavily in print, radio and television.

This is quite an achievement for a nearly 700-page book by a hitherto unknown French economist packed full of statistical tables and retailing at £29.95. Yet in the past few weeks it has enjoyed an astonishing success.

Piketty himself has been transformed into, in the words of the US editor of the Financial Times, a “rock-star economist.” His book is about economic inequality, which makes him also an unusual economist. Inequality, as a result of the crisis and the backlash against the 1 percent, has become one of the main political issues of the age.

Piketty harks back to the classical tradition of Adam Smith and David Ricardo in the late 18th and early 19th centuries. This sees political economy as a historical and moral discipline. And he is interested in studying economic trends empirically rather than constructing the mathematical models beloved of mainstream economists.

At the core of Capital in the 21st Century is a rich and interesting economic  sociology. Unfortunately, the theoretical foundations on which Piketty builds and the political conclusions he draws are not so strong.

In many ways, both the great strength and the great weakness of the book is its focus on wealth.  Much work on inequality looks primarily at differences in income. But Piketty is rightly interested in the distribution of wealth and how it has changed.  After all, with one important qualification that I’ll return to, the rich are rich because of the economic resources that they control and that allow them to claim a much higher income than anyone else.

Piketty makes excellent use of the statistical data on income and wealth that he has helped to compile as part of an international group of researchers.

His native France is a particularly rich source because of the introduction of a property tax during the French Revolution in the 1790s. This means there are continuous records covering more than two centuries. But the US, Britain and Germany also play major roles in his study.

Piketty’s conclusions refute the “law” formulated by Simon Kuznets in the mid-1950s. This claimed that income inequality rises during the early phases of industrialization, but then falls as economies become richer. Piketty’s own data paint a very different picture.

Take Britain on the eve of the First World War, in 1900?10. The top 10 percent took 90 percent of the wealth, the top 1 percent nearly 70 percent. The rest of the population had virtually nothing.

The picture was similar, though a little less stark, in France and Germany. These were societies where, despite the Industrial Revolution, the main form of wealth was for a long time land. Productivity remained comparatively low.

The upper class portrayed in the novels of Jane Austen and Honoré de Balzac which fascinate Piketty. These people depended on a huge material gulf separating them and their servants to enjoy a lifestyle two or three times the average standard of living today.

But then, after two world wars, the Great Depression, and political upheavals destroyed wealth and dramatically increased the role of the state and the level of taxation.

In the US, a settler society, wealth was less concentrated at the beginning of the 20th century, but its distribution was less squeezed in 1914-45. In 2010 the top 10 percent owned more than 70 percent of the wealth, the top 1 percent nearly 35 percent, Similar

Incomes have followed a similar path, though their distribution was never as unequal as that of wealth. They narrowed after 1914, but now have diverged sharply. For example, the 1 percent’s share of national income in the US has risen from 6-8 percent in the 1970s to nearly 20 percent in 2010.

But the constituents of inequality have changed. Land is a much less important source of wealth for the rich. And high salaries now play a much bigger role in income inequality.

Piketty dismisses the usual explanation that technological change has pushed up the salaries of highly educated employees. He blames what he calls “the rise of the super-manager”—top executives who, especially in the US and Britain, have relied on corporate cronyism to drive an “explosion of top incomes”.

Piketty denounces what he calls “meritocratic extremism”, “the apparent need of modern societies—and especially US society—to designate certain individuals as ‘winners’” and reward them extravagantly. He argues that capital was worth six or seven times national income in late 19th century Europe. It fell to two or three times in the first half of the 20th century, but is now back around five times in Britain and France.

He claims this can be explained on the basis of what he calls “the second fundamental law of capitalism”. When the rate of return on capital is higher than the rate of economic growth, the rich can save enough of their income to accumulate ever more wealth. According to Piketty, these conditions held before 1914 and are met again today.

Here things start going wrong. For Piketty, any form of wealth can be capital—a piece of land, a machine, a flat, or a bond. As critics have pointed out, this is essentially the same definition of capital as we find in mainstream economics.

For Karl Marx, by contrast, capital is a social relation. More specifically, it is the set of social relationships that allows capitalists to use their money, and the control this gives them over the means of production.This allows them to compel workers to create value and, above all, surplus value, the source of their profits. Marx thought it was the height of fetishism to identify the possession of any goods with capital.

As Piketty points out, one of the big social and economic changes in the 20th century was that far more people own their own homes. But this hasn’t given them the power to extract surplus value. His mistaken conception of capital undermines the long-term tendencies Piketty wants to project. It is connected with his ambivalent attitude towards Marx.

Calling his book Capital in the 21st Century implies an ambition to continue Marx’s great work—though he says he hasn’t read it. He praises Marx for a “key insight” into growing inequality. But most of Piketty’s comments on Marx are negative or inaccurate. For example, he says that “Marx’s theory implicitly relies on a strict assumption of zero productivity growth over the long run”.  Marx actually thought the opposite. It was capitalism’s dynamic development of the productive forces that drove it into crisis.

The book ends in a strange resentful footnote attacking the three philosophers most associated with Marxism in France—Jean-Paul Sartre, Louis Althusser and Alain Badiou.

Piketty’s own political solution to the inexorable trend to greater inequality that he discerns is a wealth tax. He points out that to wage war the US and British states taxed wealth and income at “nearly confiscatory” levels in the 1940s. But he ignores an obvious point.

As the pendulum swung back to capital, especially with the onset of neoliberalism in the 1980s, the tax system was remodeled to favor the rich. As long as capitalism exists, so will inequality. Piketty has given us a deeper understanding of what a remorseless engine of inequality capitalism is. Contrary to his intentions, he has strengthened the case not for reform, but for revolution.