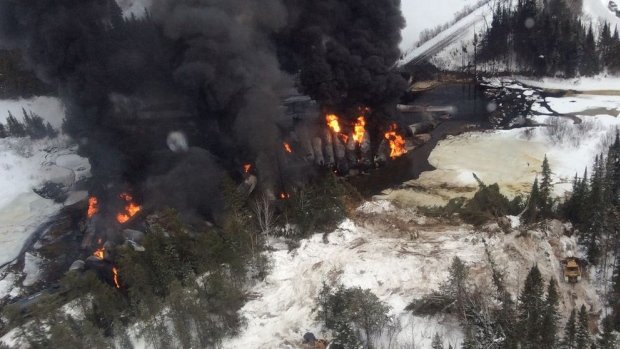 Tar Sands by rail disasters: the latest wave in the bomb train assault

With the first crash and explosion of a unit train of tar sands oil in Canada in February, we learned that the conventional wisdom among people covering the oil-by-rail industry regarding the flammability of tar sands oil has been dead wrong. A second derailment and explosion on March 7th involved synbit, which is a form of bitumen diluted with synthetic crude oil.

While there are many examples of this mischaracterization of the dangers of moving tar sands by rail that can be found in the press, here at DeSmogBlog we didn’t have to look far. In an article last year about how to make Bakken crude less dangerous we wrote that the government had plans to allow tar sands oil to be transported in the unsafe DOT-111 rail tank cars “because it is not explosive.”

While raw bitumen from the Alberta tar sands is not volatile or highly flammable, when it is diluted with natural gas condensate to form a mixture known as dilbit, which is typically done to make it easier to transport, it appears that it can be as dangerous as the Bakken crude that has now been proven to be highly flammable and explosive in multiple train derailments.

An article in Railway Age pointing out the implications of the tar-sands-by-rail accident had the ominous title “Why bitumen isn’t necessarily safer than Bakken” and concluded with the statement that “Should TSB [Transportation Safety Board] conclude that dilbit has a volatility similar to Bakken crude, as the Alberta research suggests, the hazmat classification of crude oil could be in question.”

Railway Age was referring to a 2014 study done by Alberta Innovates titled “Properties of Dilbit and Conventional Crude Oils” that reached the conclusion that “[T]he flash point is determined by the lowest-boil-point components (volatiles). Consequently, the flash point of the dilbit is governed by the 20%-30% volume diluent component …”

The reason light fracked oils like those from the Bakken and Eagle Ford are so explosive is that the crude comes out of the ground with many of the components of condensate (e.g. propane, ethane, pentane, hexane) as part of the crude mixture.

Which helps explain why dilbit is so flammable and potentially explosive because these very same components are intentionally added to the bitumen to create dilbit. And as the Alberta Innovates study noted, that makes the flash point of dilbit the same as the diluent/condensate.