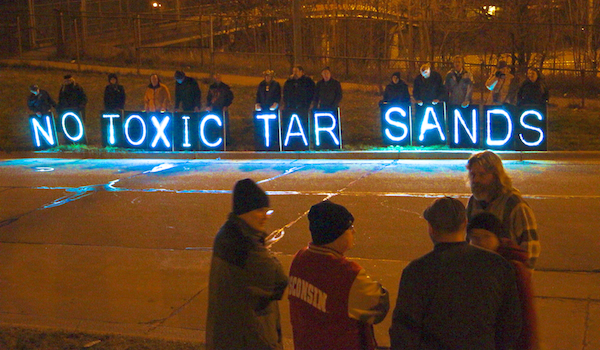 Madison — Whether or not the Keystone XL pipeline will transport tar sands oil from Canada through the United States has been framed as one of the critical decisions affecting our climate and our future as a planet. But a proposed expansion of the Enbridge Line 61 pipeline being debated in Dane County, Wisconsin may be even more critical.

The tripling in capacity of Line 61, which already carries Tar Sands crude oil from Alberta to Illinois, will make it a third larger than the projected Keystone XL.

“The last real line of defense against this expansion is an obscure zoning committee in Dane County, Wisconsin, which is scheduled to meet on January 27 to decide whether to attach conditions to Enbridge’s permit for a new pump station,” wrote Dan Kaufman recently in the New York Times.

But Peter Anderson of 350 Madison told CMD, “This is not an arcane regulatory proceeding in some back room. This is on the front lines of our fight against climate change and to achieve climate action.”

Enbridge Line 61 went into operation in 2009. When the company proposed the expansion, the Walker administration’s Department of Natural Resources (DNR) issued the company an air quality permit for a storage tank needed for the expansion in 2014, but did not require a new environmental assessment for the tripling in capacity.

Now the Dane County Board’s Zoning and Land Regulation Committee is considering attaching conditions to the permit for the new pump station — which will be needed to pump the thicker Tar Sands oil through the line, even when diluted with the chemical solvents added to make it move more easily — to provide Wisconsinites with a greater measure of environmental protection. …more