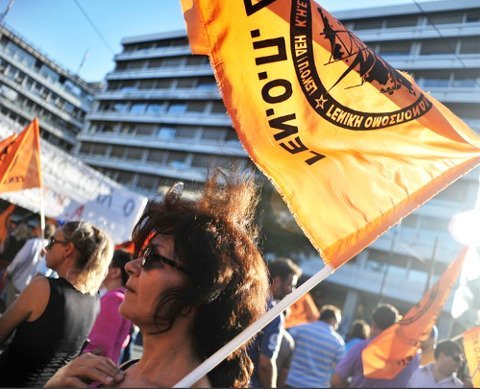 Syriza can show “another energy is possible”

During its first days in office, Syriza has taken actions that suggest it is willing to confront the EU’s neoliberal approach to energy and to embark on a new course. New Prime Minister Alexis Tsipras has also stated his government will restore collective bargaining agreements and stop 300,000 planned layoffs.

The Syriza government has said it will stop the proposed sell off of the Public Power Corporation (PPC) which is 51% publicly owned but had been targeted for full-on privatization in 2016. “We will halt immediately any privatization of PPC,” Energy Minister Panagiotis Lafazanis told Greek television a few hours before officially taking over his portfolio. “There will be a new PPC which will help considerably the restoration of the country’s productive activities,” he said.

Lafanzis also announced that that the mostly state-run gas company, DEPA, will also not be privatized. Both the PPC and DEPA were due to be privatized under the conditions imposed by the Troika.

The actions of the new government suggest that Syriza is ready to take steps to implement key aspects the platform adopted at its first Congress in July 2013. Syriza is committed to “a new paradigm of social, environmental and economic development”  and for the “ecological transformation of the economy.”  Syriza says it will pursue the “practice of democratic planning and social control on all levels of central and local government.”  In its election manifesto, Syriza declared it was for “Ecological transformation in development of energy production.”

Syriza’s program and manifesto, and its early actions to halt the further privatization of power generation and gas, suggest that the EU’s neoliberal approach to energy transition and climate protection is being challenged in a way that could have implications beyond the EU itself.  Nevertheless, Greece is heavily dependent on fossil fuels. Therefore halting privatization should be seen as a crucial first step in what will be a longer journey towards a new energy system and ecological transformation.

The election of Syriza comes at a time when the EU’s neoliberal approach to energy is in serious trouble. This approach was based on electricity market liberalization – ostensibly to promote ‘choice’ and ‘efficiency’ that was pursued via the Internal Market in Energy directive passed down to member states in 1996. The 2009 EU climate Directive also mandates a 20% reduction of GHG emissions, a 20% share of renewable energy sources, and a 20% savings in energy consumption by the year 2020 (based on 2005 levels). These are the so-called “20-20-20” targets. The EU has therefore maintained that liberalization and the the scaling up of renewable energy go hand in hand.  This is based on the groundless belief that only the private sector can drive renewable energy.

The liberalization of Greece’s electricity sector has stretched over a 14-year period. In 2001 Greece passed a law allowing any company to produce electricity, thus ending the PPC’s monopoly. In 2007 individual consumers were gradually granted full “rights” to choose their energy supplier. Renewable energy companies were given special access to distribution and transmission systems. New feed-in tariffs (FITs) were defined and introduced in 2007 and permits for offshore wind parks became possible. A modest amount of renewable energy was developed as a result of these measures, with the benefits going mainly to private companies and land owners.

But in June 2013 Greece (along with Spain, Italy and others) announced a huge cut (44.7%) in the FiT and the rush to solar and wind power in Greece ground to a halt. This has been the pattern across most of the EU as member states sought to control the mounting costs of the FiT programs. The main message here is that it takes a large amount of liberalization and, paradoxically, subsidies and government intervention, to generate a relatively modest amount of renewable energy.  Importantly, renewable energy has made real headway in Germany as a result of an expansion of municipal control and public investment. (But even here coal generated 60% more electrical power than renewable sources in 2014). In recent years many municipalities have decided to reclaim their local grids from private corporations. Germany has thus seen a major expansion of direct municipal provision of energy services. Those who refer to Germany’s successes in advancing renewable energy often appear unaware of, or perhaps reluctant to acknowledge, the role of public authorities in challenging privatization and intervening on behalf of the broader public.The EU’s dual priorities of energy market liberalization and climate protection are in fact incompatible with each other. Liberalization has led to an oligarchic situation where just five energy companies are dominant (EDF, RWE, EOn, GDF Suez and ENEL), consumer choice is mostly fictitious, and renewable energy companies rely on power purchasing agreements, ‘capacity mechanisms,’ and subsidies to survive.