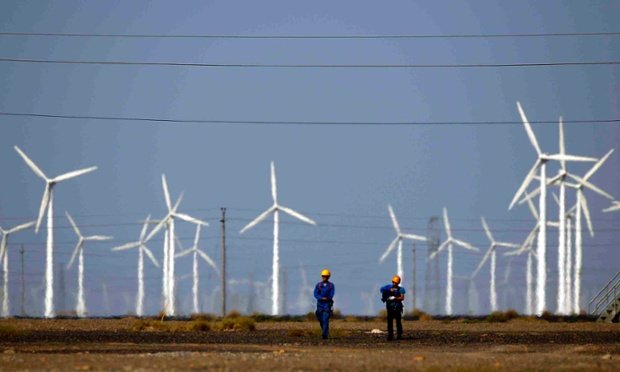 Stop using China as an excuse for inaction on climate change

China is the world’s excuse for cruelty and barbarism. If we don’t behave atrociously, politicians and columnists assure us, China will, so we had better do it first, before we are outcompeted.

You want holidays, collective bargaining rights and fair conditions in the workplace? Forget it. When Chinese workers have none, such fripperies would “hamper British/US/Australian/Canadian industry”, making it uncompetitive.

Columnists like Thomas Friedman at the New York Times, gleefully regaling us with tales of Chinese workers being turfed out of their dormitories at midnight, marched to a workstation and obliged to perform a 12-hour shift to meet a last-minute order from Apple, insist that we either compete on these terms or perish. France, he once claimed, is doomed if it seeks to preserve a 35-hour week, while people in Asia “are ready to work a 35-hour day.”

In fact French workers are doing fine: it turns out that European countries with shorter working hours (France, the Netherlands and Denmark for example) have higher productivity per hour than those whose workers have to spend longer at their desks (such as Germany and Britain). And a country whose people have both decent wages and time to relax can support millions of jobs – in leisure and pleasure – that don’t exist where workers are treated as little more than slaves.

You want your rivers, air and wildlife protected? What planet are you on? China, we are told, doesn’t give a damn for such luxuries, with the result that if we don’t abandon our own regulations, it will take over the world.

On no topic are these claims made more often than on climate change. What is the point of limiting our greenhouse gas emissions, a thousand bloggers (and a fair few politicians) insist, if China is building a new power station every two weeks (or days or minutes or whatever the latest hyperbole suggests)? Taking action on climate change is useless and stupid in the face of the Chinese threat.

China is not just a country. It is whatever powerful interests want us to be. It is, they suggest, a remorseless, faceless, insuperable threat to civilisation, to which the only rational response is to abandon civilisation. So often is the threat invoked to justify the latest round of inhumane proposals that it needs a name. Perhaps we could hijack one: China Syndrome.

China Syndrome is the 21st century extension of the Yellow Peril myth. First formulated by Kaiser Wilhelm II, whose extreme militarism, racism and anti-Semitism prefigured the rise of Nazism in Germany, the term reflects a long-standing apprehension about the people of Asia, dating back perhaps to the Mongol invasions of eastern Europe. It invokes an uncaring, undifferentiated horde of philistines, possessed perhaps with supernatural powers, but without moral limits or human qualities like empathy, pity, love or self-restraint. Unless we took extreme measures to defend ourselves against this threat, Wilhelm and others insisted, this human swarm would outbreed and overrun the nations of the west.

The myth became a staple of schlock literature and films, spawning such characters as Fu Manchu and Ming the Merciless. The idea that the people of China might “steal our jobs” is also deep-rooted. It triggered a number of pogroms in the United States during the later decades of the 19thcentury, during which many Chinese immigrant workers were murdered.

It is, of course, true that China contributes substantially to the threat of climate breakdown: it is now the world’s largest emitter of greenhouse gases. It is also true that its diplomats often prove to be a hindrance during international negotiations on the subject. That was certainly the case at the UN climate conference in Bonn that ended on Thursday, where they refused even to discuss the crucial issue: how much global warming the policies adopted by each nation will cause.

This stands in apparent contrast to the agreement struck this week, as a result of Angela Merkel’s diplomacy, at the G7 meeting, calling for “a decarbonisation of the global economy over the course of this century”.

But to suggest that China is an inherent and insuperable threat, as many of my correspondents do (mostly those who alternate between insisting that man-made climate change isn’t happening and insisting that we can’t do anything about it anyway), is grievously to misrepresent the people of that nation.