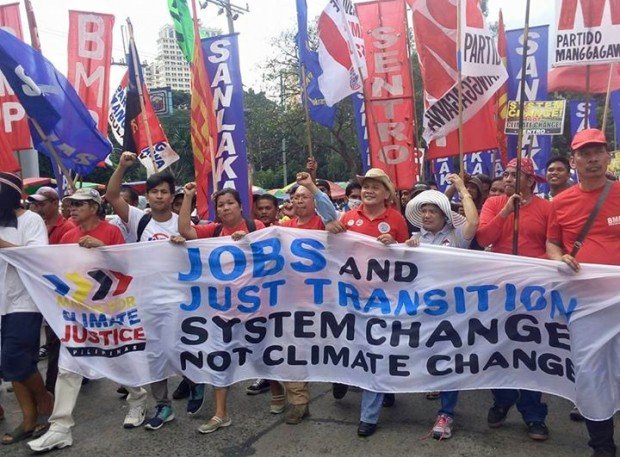 Should Unions Strike for a Just Transition?

After more than a decade of tenacious union lobbying of government negotiators, the words “a just transition of the workforce” was written into the preamble of the 2015 Paris Climate Agreement.

But now what? Encouraged by Paris, unions around the world have committed fresh energy towards giving Just Transition some practical significance, otherwise it will remain little more than a moral appeal for fairness in a corporate-dominated world economy where both morality and fairness are increasingly scarce.

This Bulletin features an article by TUED coordinator Sean Sweeney on the recent commitment made by unions in South Africa to strike for a “just transition.” However, the goal of the threatened strike is to halt the plan of the national utility (Eskom) to close 5 coal-fired power stations, a move that threatens 40,000 jobs.  Titled “When Stopping Coal Plant Closures Makes Environmental Sense” the article, which first appeared in the Fall 2017 edition of New Labor Forum, urges environmentalists not to support the closures, but to join with unions in opposing Eskom’s proposed actions.  Supporting the closures, argues Sweeney is “a poisoned chalice,”  that “will separate the environmental movement from the unions with whom it should be allied. And whatever environmental gains the 5 closures might produce at the margins in terms of avoided emissions and pollution levels will be more than offset by the impact of ‘jobs versus environment’ political fragmentation. This is why the Eskom closures should be opposed, but opposed in a way that might lay the political foundations for a more fundamental energy transition.”

Since the article was written, Eskom’s war with the private renewable energy companies has continued, with the utility pushing back against high-cost of power purchase agreements for wind and solar power. TUED union NUMSA and also the new South African Federation of Trade Unions (SAFTU) have called for a socially owned renewables sector in order to allow for a just energy transition from the present coal-dominated power system to one that can take advantage of South Africa’s abundant supplies of wind and sunshine.

South Africa could be the place where the fight for a Just Transition could be elevated into a sustained union-led national campaign. It’s worth reminding ourselves that it was the militant strikes and grassroots organizing that helped give birth to “social movement unionism” during the fight against Apartheid. Just as South African labor took the lead then, it can do so again—in a way that can build a powerful movement for a transition to a socially and ecologically sustainable political economy that could inspire unions and social movements everywhere.

The country’s energy sector is presently a political battleground where the national utility, Eskom, and private renewable energy companies (known as Independent Power Producers, or IPPs) are locked in an acrimonious war. Eskom has 96% control of the electricity market and serves this market almost exclusively by burning coal. South Africa is ranked among the highest emitters of pollution and GHGs in the world. The ruling African National Congress has backed the private renewable companies as a means of both bringing more wind and solar power into electricity mix, and to attract foreign investment.

Eskom has gone to some lengths to turn public opinion against both private renewables and renewable energy as a whole—citing the high costs of power purchase agreements signed with wind and solar multinationals and their local proxies. These agreements guarantee that the government will pay a fixed energy price over twenty years that will both lock in profits and give access to the public grid system. Needless to say, this has won accolades from the likes of the World Bank and the global “investor community” for being a model partnership between the public and private sectors.

NUMSA and allies call for dismantling the ‘mineral energy complex’