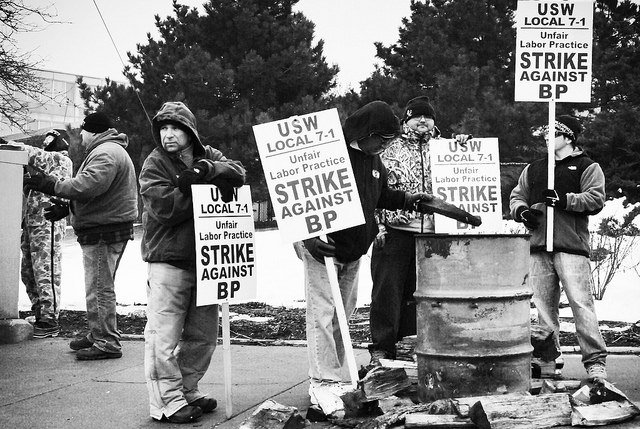 The seeds of an alternative

Thousands of oil refinery workers are striking for safer working conditions. Their fight is central to the struggle against climate change.

NGO-led efforts to combat climate change have resulted in decades of failed negotiations, increased fossil-fuel production, and degraded working conditions. The largest oil workers strike in decades — now in its third week — contains within it the seeds of an alternative: class-struggle environmentalism.

About 5,200 workers are currently on strike, though the union says that number could jump this week if the industry continues to balk at the negotiating table. Initially involving about 10 percent of the nation’s refining capacity, it has since expanded to two refineries in Ohio and Indiana and could potentially include all 30,000 workers represented by the United Steelworkers (USW).

The strike is primarily a conflict over workplace safety. And to their credit, many environmentalists have come out in support of the oil workers, quick to see the connection between safe working conditions inside refinery fences and safe communities and ecosystems around oil refineries.

But for ecosocialists, it’s not just the immediate demands of workers that are important, but the long-term ramifications of a victory. Workers have power if they act collectively. Just as they can stop oil production (30,000 workers have the capacity to halt 64 percent of the nation’s refining capacity), they can halt capitalism’s assault on the planet.

To be sure, there’s not a direct line between a strike for better working conditions and a strike for new energy and a more just economy. It is the job of ecosocialists to demonstrate the deep connection between the two, to offer an analysis and strategy of struggle that speaks to workers’ lived experiences. And there’s a long history to draw on here: the early environmental movement had deep links with industrial workers, energy workers in particular.

Oil workers are wedged between forces of capital and ecology, technological change and political power. But in the present moment, when nationwide strikes have all but disappeared from the unions’ arsenal, the refinery workers strike represents a critical juncture for the labor movement and the environmental justice movement.

As capitalism and ecological destruction are mutually constituted, so too must be workers’ power and ecological justice. Central to the fight for a new energy economy, which exists in embryo in this strike, is the question of who will produce power, and who will wield it.