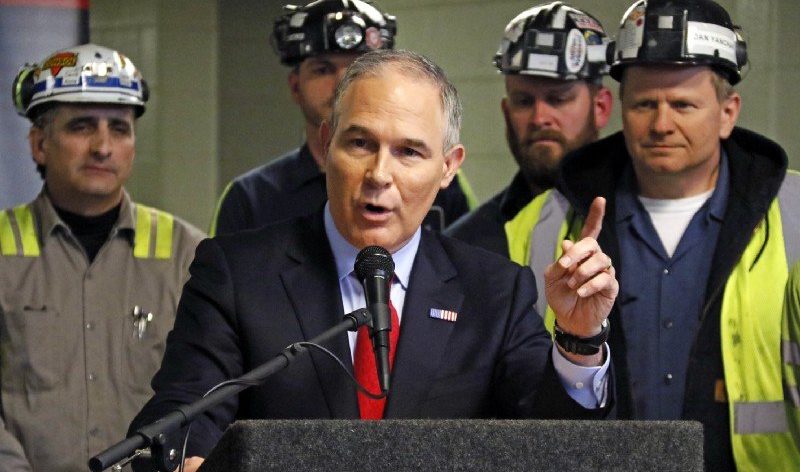 A new study appeared in the journal Nature on Wednesday, directly refuting the claim that satellite data shows global warming has leveled off, a claim made by Environmental Protection Agency Administrator Scott Pruitt earlier this year.

“Satellite temperature measurements do not support the recent claim of a “leveling off of warming” over the past two decades,” the study says.

The researchers were upfront about why they ran the study, calling out Pruitt by name. “Mr. Pruitt claimed that ‘over the past two decades satellite data indicates there has been a leveling off of warming.’ We test this claim here,” the researchers write. The study was authored by Benjamin Santer, an atmospheric scientist at the Lawrence Livermore National Laboratory, and three Livermore colleagues, as well as three scientists from the Massachusetts Institute of Technology, the University of Washington in Seattle, and Remote Sensing Systems, a scientific research company.

“In my opinion, when incorrect science is elevated to the level of formal congressional testimony and makes its way into the official congressional record, climate scientists have some responsibility to test specific claims that were made, determine whether those claims are correct or not, and publish their results,” Santer told the Washington Post.

The study found — again — that “tropospheric warming trends over recent 20-year periods are always significantly larger (at the 10 percent level or better) than model estimates of 20-year trends arising from natural internal variability.” In other words, the lowest portion of the atmosphere, where we live, is warming and is doing so in a way that does not look normal. Wednesday’s paper comes on the heels of new, additional research that refuted earlier claims, popular among climate deniers, that there was a “hiatus” in global warming.

Pruitt has repeatedly come under fire from the media and the public for perpetuating claims that are not consistent with scientific findings. Earlier this year, he told CNBC that there was warming, but that carbon dioxide emissions are not the “primary cause” of the current, rapid change in temperatures.

Santer and his colleagues spent “considerable time and effort looking at that claim,” he told ThinkProgress. Santer pointed out that Sen. Ted Cruz (R-TX) had elevated the claim on late night TV shows, NPR, and in congressional hearings.

“It was incorrect,” Santer said.

In fact, scientists have found a causal relationship between human-generating carbon dioxide emissions, largely from the burning of fossil fuels, and global warming, another finding that Pruitt has denied.

“We are in a position to make informed scientific statements about the relative sizes of human and natural effects on climate,” Santer said.

“When folks, particularly powerful folks, make specific, testable claims… don’t dismiss those claims out of hand and say, ‘Trust me, I’m a scientist,” Santer said. “Do due diligence.”

“I’m proud of the fact that’s what we’ve done here.”

In general, Pruitt has not exhibited a strong working knowledge of science. During the same Senate confirmation process that saw his “leveling off” claim, Pruitt said he didn’t know if there was a safe level of lead for children to ingest. (There is not.) The EPA is tasked with protecting the country’s air and water.

In the meantime, Pruitt has exhibited a close relationship with oil and gas companies, particularly from his home state of Oklahoma. Pruitt failed to release thousands of emails sought by Democratic senators during the confirmation process, and it was later determined that he lied in his testimony about not using a private email server.

Santer emphasized the importance of continuing scientific research into climate change. He told ThinkProgress that the budget that covers the Lawrence Livermore National Laboratory, where his work is housed, has been proposed to be cut by more than 70 percent in the newly released White House budget.

“There is a Star Trek movie titled, I think, Into Darkness,” he said. “I don’t want to see us go into darkness, scientifically speaking.”