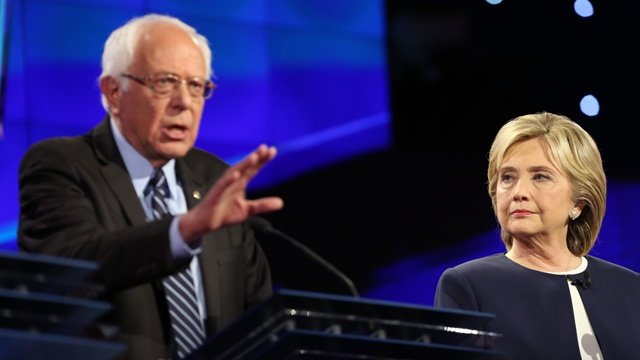 Running from the climate challenge

It is New Hampshire Primaries week. The candidates’ policies on energy, the environment, and climate change were debated topics, at least among the Democratic candidates vying for a shot at the presidency. However, the subject of climate change has been notably absent from the Republican debates and campaigning platforms. A USA Today Rock the Vote poll found that the biggest voting demographic bloc, millennials, overwhelmingly support clean energy efforts, and in addition to that 81 percent of Americans agree that we should transition to clean energy by 2030.

Recently, the League of Conservation Voters, an advocacy organization that [assists] political candidates support a pro-environment agenda, came out in support of Hillary Clinton. Meanwhile, the Friends of the Earth, another high-profile environmental group, has thrown its support behind Bernie Sanders.

To discuss all of this and the kind of environmental policies that are required to seriously address the urgent problem of climate change we have two guests, Michael Oppenheimer and Chris Williams. Michael Oppenheimer is the Albert G. Milbank Professor of Geosciences at Princeton University. He’s a participant in the Intergovernmental Panel on Climate Change, the IPCC, which won the Nobel Peace Prize in 2007. He’s a lead author of the IPCC 5th Assessment report. And we’re joined by Chris Williams. He’s a longtime environmental activist, professor of physics and chemistry at Pace University, and chair of the science department at PACA Collegiate Institute. He’s the author of Ecology and Socialism: Solutions to Capitalist Ecological Crisis. Thank you both for joining us today.

MICHAEL OPPENHEIMER: Pleasure to be here.

PERIES: My first question to you, Michael. How concerned should Americans be about the disaster effects of climate change in our lifetime, and particularly in light of these elections?

OPPENHEIMER: I think it’s right up there as the number one, or among the number one problems that we have to deal with in this century. It really relates to the future of humanity writ large, and if we don’t grapple with it starting immediately, in fact we should have started 20 years ago, there’s little hope of avoiding a dangerous warming with changes which will be destructive and perhaps even catastrophic, particularly in countries that can least afford it.

As far as the presidential election, there’s been a discouraging lack of discussion about this issue on both sides. On the Republican side it’s been mostly because the candidates are running away from the issue because large segments of the Republican base in fact don’t believe in science at all, much less the science of climate change. And as far as the Democrats are concerned, I think because they probably don’t have sharply different views, although there are some differences, I’m sure, and because there’s no extreme position being raised in terms of not acting on it by either candidate, it also hasn’t gotten the attention it deserves.

There were some specific plans rolled out earlier by Clinton, and Sanders had said some constructive things along the way as well, although usually staying in kind of the 20,000-foot level. So I would like to see much more engagement between those two, and I’d like to see the Republicans get real about it, and tell us how they’re going to grapple with an issue that’s basically about the fate of the planet and the future generation, and beyond.

PERIES: Now, Chris, how serious do you think these candidates are about the issue?

WILLIAMS: Well, I mean, I don’t see how anybody could take Hillary Clinton very seriously on any principle, actually. But with regard to the environment, she has a, a long track record as Secretary of State of not just supporting fracking but actively causing it, its expansion internationally. And so–against the wishes of many of the inhabitants of Poland, Romania, she pushed the State Department and the U.S. government to make sure that fracking started to occur in those countries. She’s a big proponent of it. She fully supports Obama’s all-of-the-above energy policy, so yes, while there is some support for renewable energy there is continued support for more offshore drilling, more fracking, et cetera.

And so anybody who’s not really talking about shutting off and closing down some sections of industry, i.e. the fossil fuel industry, starting with the coal industry, and retraining those workers, and then shifting funds and subsidies–I mean trillions of dollars in subsidies, hundreds of millions, billions actually in the United States alone–to the fossil fuel industries, which is, should also be switched to alternative forms of energy. There was just a study out by [NOAA], U.S. government organization, saying that by 2030 we could have almost totally carbon-free energy cost competitive with fossil fuels. So the government itself is saying it’s possible, and yet the candidates are not following their lead.

So I think it’s the same story of talking about supply-side stuff without talking about the ways in which consumption is a problem, but never doing anything about production. And so based on where we are right now, and as Michael was just outlining with regard to the very severe consequences not just that we’ll face in the near-term future but the longer-term future even more, and many people, millions of people are already experiencing. So with regard to climate change, severe weather events and so on, it’s only going to get worse.

And so we really have to be acting now, and the next president is going to be in power until 2020. What are they really going to do? I don’t think any of the candidates have really talked about the ways in which actually we need to have much more control over our resources, democratic control, so that people have a say in what’s happening. For example, I mean, look at Flint right now, which was–the people there are being poisoned by not the corporations, actually, in this instance, but by their own government, by the elected representatives and the people who are there to protect them.

So why don’t we, Obama boasted while Hillary Clinton was in the State Department, boasted about laying more pipeline or enough pipeline for oil and gas production to encircle the earth and then some. But Flint is only 17 miles away from the Great Lakes. How come they’re not laying that pipeline? I think these are some pretty pointed questions that we should be asking about reorientating society away from the production of fossil fuels. And not just that, but like, how do we as a people have more say so that this is actually a democratic country instead of ruled by the corporations, which pay a lot of money to Hillary Clinton in particular to make sure that she abides by their interests as opposed to ours.

PERIES: And Michael, what do you make of what Chris is saying here?

OPPENHEIMER: Well, I tend to think of this problem in more concrete terms. What I’m interested in, if I had the candidates in the room, would be ask them what they’re going to do to make sure there isn’t a successful attack against the regulations that this administration, the current administration, has put on greenhouse gases which have our emissions going down significantly. I’d like to know what the plans are for making sure that downward trend continues, not just through 2025 or so, which is as far as the current plan goes, but in the decades beyond where we soon have to cut our emissions by 80 percent or more to make sure that there isn’t a dangerous warming.

And third, I’d like to know what the next president is going to do as far as international leadership is concerned, and really bringing other countries together with us, because no one country can solve this problem, to actually get the job done, so that while the goals that Chris has outlined and the problems that he’s underscored, related to structural issues within the American political system, are real and need to be grappled with, I also think that those probably won’t be fixed overnight. And in the meantime, earth is warming very rapidly and we need to do certain things in the short term. So I don’t see these agendas as being conflicting by any means, I just think we can’t afford to hold up dealing with greenhouse gases until these major structural changes are made.