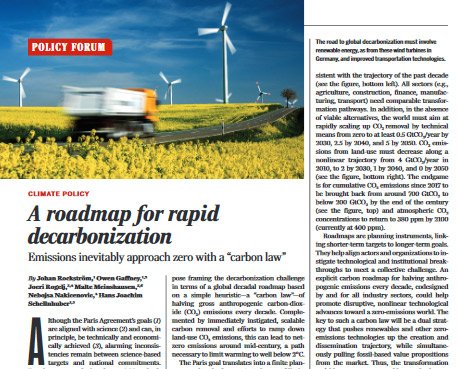 A roadmap for rapid decarbonization

2) Net emissions from land use — i.e., from agriculture and deforestation — have to fall steadily to zero by 2050. This would need to happen even as the world population grows and we’re feeding ever more people.

Some proposed instruments: “Annual emissions from fossil fuels must start falling by 2020. Well-proven (and ideally income-neutral) policy instruments such as carbon tax schemes, cap-and-trade systems, feed-in tariffs, and quota approaches should roll out at wide scale.”

Some radical proposals along with some very questionable assumptions.

See comments from Richard Smith below…

There is nothing new here. Ecosocialists have long criticized this sort of strategy. Here is a reprise of the critique of this strategy I published in my six theses paper and elsewhere, here reduced to three:

1. The problem is not carbon. The problem is the economic system we live in. We live in an economy based on infinite growth, infinitely rising consumption, and thus infinitely rising CO2 emissions — since no has yet figured out how to continuously grow the economy without continuously growing emissions because there is, in fact, no tech fix. “Sucking CO2 out of the atmosphere” while the global economy and human population continue to rise exponentially is risible, delusory and impossible (though trying to do so is good for the GDP). And of course CO2 is only part of the larger problem: that we can’t sustain an infinitely growing economy on a finite planet.
2. These authors are scientists. Like James Hansen, they don’t know anything about economics. How do they imagine we can cut fossil fuel consumption in half decade after decade without devastating the economy, without precipitating global economic collapse? Given capitalism, no government, no company, no union, no general population will accept the kind of draconian carbon taxes and/or mandated suppression of emissions which would be necessary to stop global warming and save the humans in the long run because in the short run this will mean mass unemployment, economic collapse, world depression. And yet if we don’t impose just such a draconian suppression of fossil fuel consumption, and very soon, we’re doomed: http://www.truth-out.org/news/item/39957-release-of-arctic-methane-may-be-apocalyptic-study-warns. What to do?
3. The only real solution is to demand immediate suppression of production and consumption across the board: shutdowns and/or radical retrenchments — not just of this or that pipeline or oil field or coal mine – but of all the industries and services that are based on fossil fuels including autos, aircraft, airlines (transportation is now the leading source of U.S. CO2 emissions), chemicals, synthetic fabrics, plastics, industrial farming, construction, shipping, tourism, the entire disposables economy, etc. etc., especially but not only in the in the overproducing/overconsuming industrialized countries like the U.S. and China. If that’s not acceptable to capitalism then we, humanity, will have to decide which we want to save, capitalism or the planet. And if we prefer to save the planet, then we’re going to have to cashier capitalism and create a humane and sustainable eco-socialist economy.
-Richard  Smith