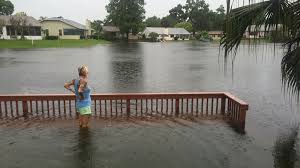 Rare US floods to become the norm if emissions aren’t cut, study warns

US coastal areas are set to be deluged by far more frequent and severe flooding events if greenhouse gas emissions aren’t slashed, with rare floods becoming the norm for place such as New York City, Seattle and San Diego, new research has found.

The study, undertaken by researchers from Princeton and Rutgers universities, found that along all of the US coastline, the average risk of a 100-year flood will increase 40-fold by 2050.

Such floods are statistically expected to occur only once every 100 years because of their severity, although this doesn’t mean these sort of floods never happen in consecutive years. The annual chance of such a flood is around 1%.

The research found that if emissions are not curbed, San Francisco and Seattle would both get a 100-year flood every year by 2050, while San Diego would expect 10 such events annually and Key West in Florida would be hit 11 times a year. Some of the worst affected areas would be in Hawaii, with Mokuoloe island, situated off Oahu, forecast to be deluged by 130 floods a year that are currently considered to be 100-year events.

Michael Oppenheimer, a Princeton climate scientist and co-author of the paper, added that New York City is set to get a 100-year flood every 20 years by 2050 but this frequency would leap to a large flood every other month by 2100.

“Most coastal areas will experience relatively large increases in flooding events,” he said. “A 40-fold increase on average is gigantic – cities may not be able to defend themselves. They will have to spend a lot of money or there will be quite a lot of damage.

“Many cities are already behind the eight-ball in terms of preparing for flooding. There will have to be a hard headed look at whether some areas can be defended or will have to be abandoned. Cities are only just starting to grapple with this.”

The projections are based upon “business as usual” emissions where the world does little to constrain the release of heat-trapping gases from electricity generation, transportation and other activities.