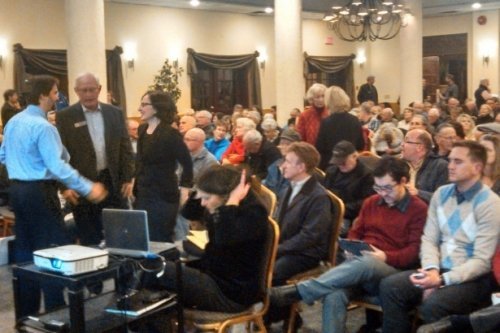 The city councils of Surrey and White Rock say they are keenly interested in a relocation inland of the railway line that runs along their ocean shorelines. That message was welcomed by most of the 400-plus people attending a public forum on the topic that the two councils hosted at the Pacific Inn in south Surrey on Nov 26. The forum featured Surrey mayor Dianne Watts and White Rock mayor Wayne Baldwin. Each was given much applause when they declared that it’s time to move the line inland. The case for relocation of the BNSF line has long been compelling. But the realignment proposal begs several important issues that were not answered at the public forum. These include what, if anything, will be done with the air, noise and chemical pollution that accompanies the diesel-powered rail line; and whether a faster and safer rail corridor would end up facilitating expansion of coal and oil transport by the rail operator, Burlington Northern/Santa Fe in partnership with the ever-ambitious Port of Metro Vancouver?