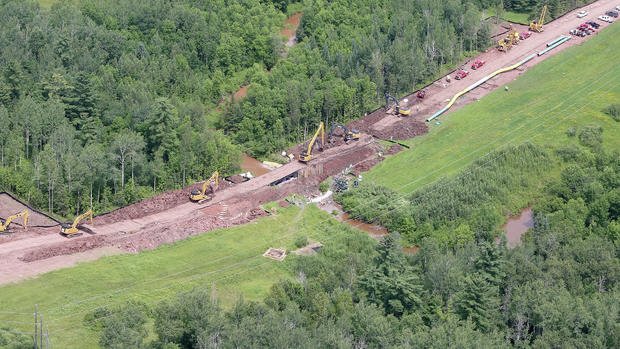 SUPERIOR, Wis. — Protesters identifying themselves as water protectors shut down construction for roughly two hours on a section of the Enbridge Line 3 pipeline replacement outside Superior on Monday, Aug. 21.

The event was broadcast and shared on social media, showing vehicles carrying a few dozen protesters as they arrived at around noon to what an Enbridge spokeswoman described as a 12.5-mile segment of the new line that runs along Douglas County Road W.

Some protesters wore masks covering their faces and could be seen in videos locking themselves to heavy equipment. Others were overheard telling workers to “go home early,” “stop destroying our mother” and “we’re here to protect the water.” They emphasized repeatedly they weren’t there to harm anyone, and deputies from the Douglas County Sheriff’s Office were on scene monitoring the protest.

“This non-violent direct action (came) from the heart,” said organizer Neo Gabo Benais, of Onamia, Minn., who allowed the Duluth News Tribune access to publish his Facebook comments. “Our planet is perfect, but we are destroying it.”

No arrests were made or citations issued, said Sheriff Tom Dalbec, whose office was made aware of the protest prior to its starting by Enbridge, members of which had seen it forecast in other media.

As protesters crossed the muddy track to the heavy equipment, roughly a dozen workers locked the cabs to their equipment and could be viewed leaving the scene. There were brief comments between some parties, but no confrontations were apparent.

“We wanted to handle it as peaceably, skillfully and tactically as possible,” Dalbec said, “and that’s what we achieved.”

The Enbridge spokeswoman, Jennifer Smith, said workers returned to the scene to continue work roughly two hours after the protest. Smith had been on her way to the site with another company representative to speak with protesters. By the time they arrived, Smith said, everyone had left. Construction on other segments of the line continued unabated around Superior during the protest, Smith said.

“We respect the right of others to express their views on energy that we all use,” she said.

The new pipeline would replace Enbridge’s existing 50-year-old Line 3 that crosses northern Minnesota on its route from Alberta to Superior. While construction has started in both Canada and Wisconsin, the review process in Minnesota remains ongoing with a decision on whether or not to approve the pipeline expected sometime next spring. Smith explained that Enbridge and its contracted workers are trained extensively on safety. If they feel unsafe, they are to lock their equipment, not engage and leave the scene.

While she said the company’s primary concern is always with the safety of workers, she also expressed concern for the protesters, saying there is an active line adjacent to the construction and that the muddy construction environment raised the potential for human harm.

“Line 3 is a safety and maintenance-driven project — replacing 1960s older, vintage pipeline,” she said. “It is needed, and it is going to keep communities safe.”

She added that protesters were trespassing and that there was damage to equipment, but she would not specify of what sort. No vandalism is visible in any of the social media documenting of the protest.

Dalbec said the protesters did not cross a line that would have required greater law enforcement action.

“If they didn’t want to do anything too radical,” he said, “we were going to let them do their thing.”

Benais said the intent of the protest was to halt construction, calling the Canadian tar sand product “the dirtiest crude oil in use.”

He added, “This was an urgent action taken to save our planet.”