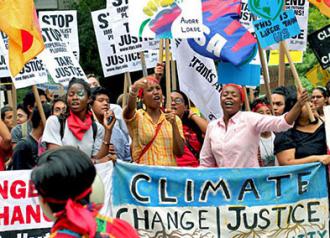 THE LATEST world summit conference on climate change, due to begin in Paris on November 30, will take place against the backdrop of continuing climate disasters–including a new report from the National Oceanic and Atmospheric Administration that the planet suffered its hottest summer ever recorded, and possibly the hottest in 4,000 years.

That ought to give some urgency to the two-week-long meeting–officially called the 21st Congress of the Parties for the United Nations Framework Convention on Climate Change, or COP 21–that is supposed to finally produce a binding international treaty to limit greenhouse gas emissions, with the goal of keeping the global temperature rise to less than 2 degrees Celsius.

But there’s lots of reasons to doubt the resolve of world leaders–the recent failure of preparatory talks in Bonn, the lack of ambition or action by powerful governments in the past and, of course, the dismal record of previous COPs to accomplish anything meaningful. Whatever agreement is struck in Paris, it won’t do nearly enough.

Climate justice activists worldwide will send a different message from the politicians’ hot air–and show their determination to be heard with events and actions throughout the fall, culminating in large protests in Paris itself.

EARLIER THIS month, the Guardian reported that climate change campaigners are promising a blockade of the COP 21 summit and nonviolent direction action “on a scale Europe has not seen before”:

Grassroots groups from 350.org to Attac France are throwing their weight behind the ‘Climate Games’ event for the landmark climate conference in December. The protests will involve 10 blockades, themed around “red lines” which they fear negotiators for the nearly 200 countries inside the summit may cross.

October and November are seen as months to build toward the Paris demonstrations. For example, the People’s Climate Movement organized a day of action on October 14, with roughly 200 events and protests.

In New York City, for example, more than 200 people turned out for a 12 Noon action targeting Chase Bank for its investments. As Nancy Holmstrom reported at the New Politics website, “The protesters decried Chase’s massive investments in coal, oil and gas, as well as its 1 million-plus shares in private prisons, its role in the foreclosure crisis and its support for the New York Police Foundation with a $4.6 million donation in 2011, the largest in the Foundation’s history.”

The demonstration merged with another nearby protest against Blackstone, a large private equity firm that owns a lot of housing property and contributes to the city’s foreclosure crisis.

That evening, a second protest gathered at the State Office Building in Harlem to demand change from the political system. Though smaller and less grassroots, unions like AFSCME District Council 37 and Service Employees International Union 32BJ had contingents.

This was a welcome development for an environmental movement that has a history of ignoring issues of race and class–and also for a labor movement that spends too much time and money on the Democratic Party, and that has been hostile to environmental struggles in the past. But given the size of the unions’ memberships, some felt labor could have mobilized greater numbers.

The final action of the day confronted New York Gov. Andrew Cuomo as he turned up for a Broadway show. As Holmstrom reported, activists want Cuomo to veto the Port Ambrose Liquefied Natural Gas (LNG) project off the coast of Long Island, near John F. Kennedy International Airport.

Cuomo has a record of working for the natural gas corporations, but after years of being dogged for his support of fracking the Marcellus Shale in upstate New York, he finally banned the environmentally destructive practice in 2014. But Cuomo has yet to make up his mind about the proposed LNG terminal. Activists are speaking out for an alternative: a proposed 700-megawatt wind farm that would create 17,000 local jobs.

In Washington, D.C., a diverse group of activists protested the American Petroleum Institute on October 14, speaking out about the need to transition from fossil fuels toward renewable energy.

Lisa Brown, executive vice president of 1199SEIU United Healthcare Workers East, spoke to the crowd about the connection between health, poverty, jobs and the climate: “Climate change’s public health impacts fall disproportionately on Maryland’s communities of color and poorest communities. Where you live shouldn’t determine if you live.”

THE PEOPLE’S Climate March in New York City in September 2014 marked a high point for the environmental movement, with a turnout numbering in the hundreds of thousands and worldwide publicity aimed at the world leaders who had gathered for a UN conference on a binding international treaty on climate change and emissions.

March organizers renamed themselves the People’s Climate Movement–they were the main force behind the October 14 day of action.

In the run-up to the 2014 march, the climate justice wing of the movement started gaining prominence, emphasizing questions of colonialism, gender and racism in relation to the environment, thus broadening the political spectrum of the movement.

Anti-capitalism has a growing influence in the movement, particularly among the generation coming of age in an era of austerity and climate doom. Growing numbers of people see how a system based on making profit is both destroying the earth and people’s ability to reach their human potential.

Black Lives Matter protests have had further influence on the left wing of the movement. Along with other radical struggles like Occupy Wall Street, the size and influence of BLM helped loosen the grip of professional, corporate-friendly NGOs like the Environmental Defense Fund–giving a louder voice to people of color and leftists demanding that more attention be paid to environmental racism, police brutality, colonialism, jobs and inequality.

A coalition including 350.org, Million Hoodies, Fossil Fuel Divestment Student Network and the Hip Hop Caucus, among others, has called a national youth protest in Washington D.C. for November 9. Demands include keeping fossil fuels in the ground; protecting the lives of Black, Brown and poor communities; reinvesting in healthy jobs; renewable energy; and an economy that works for all.

On the West Coast, in Oakland, the Northern California Climate Mobilization has come together to organize a march and rally on November 21, leading up to COP 21, with a call for a global agreement to dramatically and rapidly reduce global warming pollution, among other demands.

As the conference gets underway, there will be big demonstrations on November 28 and 29 in cities around the world, including a People’s Climate March in London. On December 12, organizers in Paris are calling for a “global blockadia,” with decentralized actions around the world aimed at escalating toward the spring of 2016.

WHAT CAN be expected inside the climate summit in Paris? UN negotiators badly need to save face–though not necessarily the planet–by producing a plausible treaty. In developed countries, government leaders need to appease rising demands to do something about climate change.

Yet behind the rhetoric, leaders of these wealthier countries are still digging in their heels to limit financing of global justice initiatives, lower targets for emissions cuts and avoid the kind of ambitious climate deal that poorer countries and island nations need merely to survive.

Should the UN pull a rabbit out of the hat and salvage the negotiations, expect the media and talking heads to praise the deal as the salvation for humanity. If things go sour, expect the White House to blame China.

But we already know that the highest expectations for the agreement fall well short of what is needed to stop climate change. Massachusetts Institute of Technology Sloan School of Management and Climate Interactive recently released a report showing that even if countries stuck to their Intended Nationally Determined Contributions to emissions cuts being put forward for Paris, global temperatures would still rise by 3.5 degrees Celsius by 2100, which would result in catastrophic ecological change.

UN officials are also bragging that they are close to meeting the goal of raising $100 billion each year until 2020 for the Green Climate Fund–is meant to help hard-hit countries adapt to, and mitigate the effects of, rising sea levels, drought, flooding, famine and other calamities.

However, the sources of funding and how the money will be used remains highly contentious. The so-called “Group of 77” developing countries plus China are calling for countries that have historically produced the bulk of greenhouse gas emissions to pay for mitigation and adaptation. For example, the U.S. is responsible for 28.8 percent of emissions between 1850 and 2007, with China responsible for only 9 percent.

But Western government want to shift the blame and emphasize China’s current emissions–which also ignores the fact that much of China’s manufacturing output is for Western-based corporations like Apple.

In addition, poorer nations want both a strong emphasis on adaptation and local control provisions in all initiatives, which richer nations favor mitigation and a reliance on the market, private finance, mega-projects and less public ownership.

Some companies stand to make billions off mitigation and so-called “geo-engineered”–that is, fake–solutions like bioenergy and carbon capture and storage. Meanwhile, fossil fuel projects aren’t explicitly banned by the Green Climate Fund, a fact not lost on some traditional energy behemoths that now support a climate deal.

Even if Western governments conceded and fully funded the Green Climate Fund, the truth is that the money involved is a drop in the bucket–both compared to what is needed, and also to the $5 trillion in subsidies given each year to the fossil fuel industry around the world. Put another way, 98 percent of the aid is going toward using fossil fuels, and 2 percent is going toward fighting climate change.

THERE IS more evidence all the time of the urgent need to win real action against rising greenhouse gas emissions. The most recent of the super-storms linked to climate change was Hurricane Patricia–“the most powerful tropical cyclone ever measured in the Western Hemisphere,” according to Weather.com–which caused massive flooding and damage where it made landfall on the Pacific coast of Mexico, and everywhere it traveled after, up to Texas and Louisiana on the other side of Mexico.

These climate disasters, plus the lack of action by world leaders beholden to corporate interests, has pushed to the forefront debates in the movement about what to do now–for example, what should the relationship be between broad demonstrations and direct action inside COP 21 and outside in the streets of Paris?

One factor in these discussions is the character of the mainstream environmental groups and NGOs that organized the large march in New York City in September 2014, and that now seem to be dominating in Paris. With their top-down liberal politics, this wing of the movement acts as if grassroots action can be turned on and off like a light switch–whereas sustained grassroots protest is exactly what is needed to put more pressure on the political establishment.

Mass demonstrations play an important role, including introducing new people to the struggle, but they can’t be an end in and of themselves. On this note, one welcome development is the mobilizations organized by Trade Unions for Energy Democracy (TUED), an initiative involving unions from 17 countries, including South Africa, Australia, Canada, India, Britain and the U.S.

TUED is headed to Paris with the goal of representing labor as a vital force within the climate justice movement. In September, TUED hosted a union climate summit in Paris under the slogan “No Jobs on a Dead Planet!”

No matter how the actions shape up in Paris and around the world, many thousands of people will be marching, demonstrating and sitting in to stop climate change this fall. This will send another clear signal of the determination of those mobilized to fight for climate justice–and offer opportunities to further the much-needed discussions about what it will take to stop climate change and what forces are needed to confront capitalism’s pursuit of profit at the expense of people and the planet.