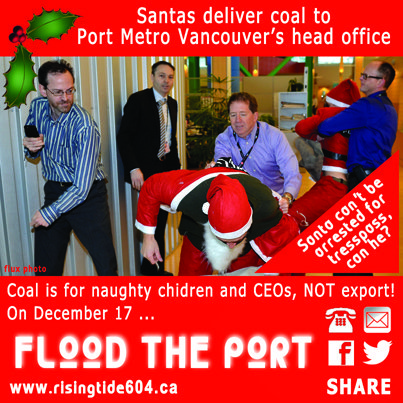 VANCOUVER, COAST SALISH TERRITORIES – This morning Port of Metro Vancouver staff and security responded with physical force when 6 Santa Clauses arrived at their offices to deliver sacks of coal, along with thousands of peoples’ wishes urging the port to say ‘no’ to a new coal terminal in Surrey. Six activists from Rising Tide Vancouver, Coast Salish Territories (dressed as Santa Claus) entered the Port Metro offices delivered coal to port staff, and read out public comments submitted to the port as part of a 30-day review of the Fraser Surrey Docks Environmental Impact Assessment.