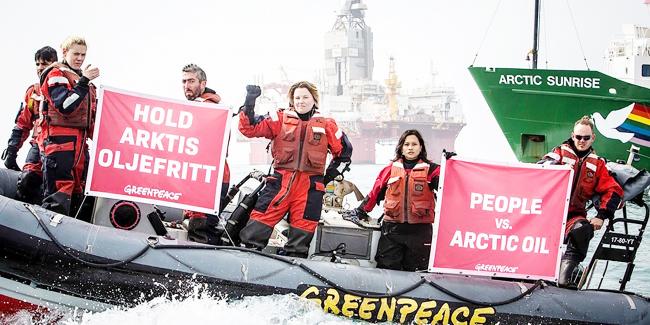 JOANNA Sustento lost most of her family along with 7, 000 other people in her city when Super Typhoon “Yolanda” battered Central Visayas on Nov. 8, 2013.

Four years later, the 26-year-old Tacloban native is traveling to the Arctic, along with other climate change advocates from Greenpeace, to confront the Norwegian government and a giant oil company, Statoil, which has another gas drilling project in the Barents Sea in the Arctic Ocean.

“I consider this story my reason, my purpose, as to why I was given another chance to live,” Sustento said.

She said her stay aboard the Greenpeace ship “Arctic Sunrise” in the Barents Sea from July 18 to Aug. 6 is “very personal.”

Sustento, who has not seen the remains of her father and nephew, said being in the Arctic was like “meeting the monster” that killed her family and left her city in ruins.

“For every Filipino bearing the ramifications of climate change. For every parent who lost a child. For every brother or sister who lost a sibling. For every aunt or uncle who lost a niece or nephew. For every child who lost a parent. For Tacloban. For Leyte. For all of the humanity,” she posted on her social media account.

Greenpeace said Sustento, along with other climate activists like New Zealand actress Lucy Lawless, is in Arctic to urge the Norwegian government to be truthful to its commitment and responsibility when it recently signed the Paris climate agreement. Despite its commitment in Paris, Norway has approved new drilling license for 13 companies in completely new areas for the first time in more than two decades.

Sustento said being in the Arctic has enabled her to track the “big polluters” that have wrought massive disorder on the Earth’s climate.

“People from the developed nations would never fully grasp what we are currently going through but they should at least get a glimpse of how climate change affects us on our side of the world,” Sustento said, hoping that she could put a human face on the terrible effects of climate change.

Sustento said the effects of oil drilling in the Arctic will not only affect the people in the Arctic circle but also those in the rest of the globe.

“It’s us in the island nations who will be gravely affected,” she said.

Sustento said she hoped that their sentiments will be heard by the Norwegian government and big oil companies in the Arctic.

She expressed fear that if the government would side with short-term profit over people’s rights to a safe, clean and healthy environment, there will be no future worth looking forward to for the next generation.

“What’s even more frightening is the thought of people resigning to that fate and not taking action. I fear that people would continue to accept irresponsible practices and endure its devastating consequences,” she said.

“What happened to my community in Tacloban is an example of things to come for other people if we continue to focus on short-term gain.”