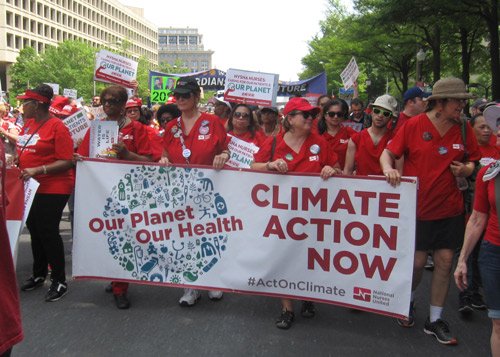 Nancy and joined the Climate March in Washington D.C. yesterday. Big crowd, reported at around 200,000 and it sure looked like it. The march went on for hours. What was interesting to was the breadth of people — lots of mainstream types, ethnically more mixed than demos we’ve been to in recent years. Lots of very creative, mostly handmade, signs, which I send along to you here for reposting. That said, the expressed politics, at least in signs and banners, were not very radical. Hardly any anti-capitalist signs or banners out of hundreds of thousands of signs. We didn’t get to hear many speakers because of where we were. Of those we heard, they were politically muted, mostly lashing out at Trump not capitalism, and supportive of science. OK as far as it goes, I guess, but I was hoping for a bigger left presence. It’s possible there were more left groups and we just missed them as it was a big crowd on a long march. It would also have been nice if more System Change people joined us. But Nancy and I carried our banner and it was much photographed. Richard