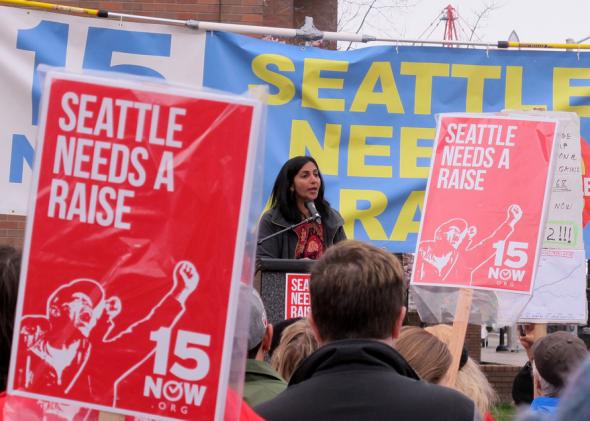 The following remarks were made by Seattle City Councilor Kshama Sawant on Monday, June 2, as the council voted unaminously to pass a $15 minimum wage, the highest in the nation:

Today, workers in Seattle have made history.

A half century ago, Dr. Martin Luther King Jr. fought for a living wage at the March on Washington, where a quarter of a million people, mostly black workers, demanded their rights. They called for $2/hr. In today’s dollars it is the same number – Dr. King and his movement had launched the first fight for 15, at the same time they fought against the brutal racism of Jim Crow.

With this vote, Seattle will become the first major city in the U.S. to win a $15/hr minimum wage.

Our victory comes less than 6 months after the launch of 15 Now, after the election of the first socialist to the city council in 100 years. We built on the work of labor in Seatac, on the growing movement of the fast food workers which began in New York one year before. We worked alongside organized labor in Seattle, which campaigned continuously for 15.

We forced the city establishment to lift the wages 100,000 low wage workers in Seattle – to transfer $3 billion from business to workers at the bottom of the wage scale over the next 10 years.

We did this. Workers did this.

Today’s first major victory for 15 will inspire people all over the nation.

We need to recognize what happened here in Seattle that led us to this point.

15 was not won at the bargaining table as the so-called “sensible compromise” between workers and business. It was not the result of the generosity of corporations or their Democratic Party representatives in government.

What was voted on in the city council was a reflection of what workers won on the street over this last year.

In 15 Now, groups of workers and activists met weekly, held mass conferences and debates, organized rallies, and engaged thousands of people around the city about the need for a living wage. We won the public debate – in a recent poll 74% of voters now support 15. We defeated the arguments of business in the corporate media.

Let this be our guide. At every stage of the struggle, corporations and their representatives, have sought to undermine our efforts. And future victories will also depend on the organization of working people fighting for our interests.

This is also why we need an alternative to the two parties representing business. Despite the Democratic Party posing as a progressive alternative to the Republicans – we can see here in Seattle how it was only with the election of a socialist that the establishment was forced to pass real gains for workers. We need many more independent and socialist candidates to turn the tide against corporate politics.

Our victory is not complete, but we have fought until the last day, the last hour, against all the loopholes demanded by business.

We’ll come back to the questions of tip penalty, the long-phase in, the training wage.

What was lost through corporate loopholes is a reminder to us that outcomes are determined by the balance of forces. It is a reminder that we need to continue to build an even more powerful movement. A movement strong enough to overcome the counterattacks from business. A movement that goes on from 15 to win further gains to address the stunning income inequality workers face – that will fight for rent control, taxes on millionaires & big developers, and full funding for all public services.

I appeal to all workers to join the movement. The attempts of business to undermine 15 will continue, well after this vote today. They may submit legal challenges, they may challenge at the ballot, they may wait for their moment to make the “temporary” tip penalty permanent.

But today’s message is clear: If we organize as workers, with a socialist strategy, we can tackle the chasm of income inequality and social injustice.

15 in Seattle is just a beginning. We have a world to win.