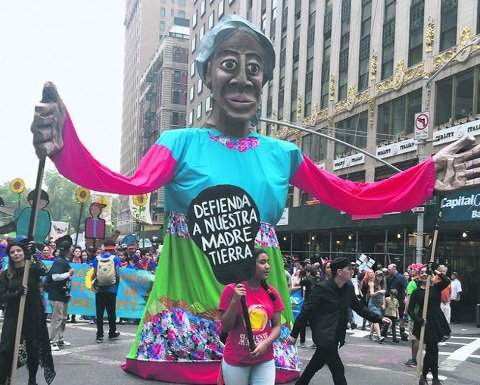 The Paris Climate Talks and the failure of states

The officials in charge of the United Nations climate talks say that no deal will be done in Paris in December (COP21) to avoid dangerous global warming. After preparatory negotiations in Geneva, Switzerland, this month, Christiana Figueres, executive secretary of the UN Framework Convention on Climate Change (UNFCCC), confirmed that the target set previously, of limiting warming to 2 degrees centigrade above pre-industrial levels, would be missed. Figueres had already said, in December, after a round of talks in Lima, Peru, that “the sum total of efforts [in Paris] will not be able to put us on the path for two degrees. […] We are not going to get there with the Paris agreement … We will get there over time.” This month she reiterated that the Paris talks would only “set the pathway for an orderly planned transition over time to a low-carbon society.”

The EU climate commissioner, Miguel Arias Canete, claimed that “you cannot say it is a failure” if, collectively, the world’s governments abandoned the 2 degrees target, as long as there is “an ongoing process.”

Diplomats at Geneva put together an 86-page document for political leaders to haggle over in December. But it’s already clear that:

Massimo Tavoni of the Politecnico di Milano, who led the research, acknowledged that “there’s a lot of uncertainty” with the countries’ targets and their exact effects. What is not uncertain is the relationship between carbon dioxide emissions and warming (see “The Global Carbon Budget,” below).

Neither is there any doubt about the terrible human suffering that researchers associate with warming of 3 degrees or more. (You can get an idea from the latest Intergovernmental Panel on Climate Change (IPCC) Synthesis Report which contains frightful descriptions of the likely consequences of 4 degrees of warming. And don’t forget, there are no exaggerations here: it’s all been signed off by representatives of all countries that have signed the convention, including Saudi Arabia and other oil producers.)

This is a collective failure of the world’s large states.

In 2009 at Copenhagen, Denmark, they acknowledged the 2 degrees target – and in 2010 at Cancun, Mexico, wrote it into an international agreement – but failed to make commitments to achieve it. This year in Paris, they will abandon any pretence of concerted action, rubber-stamp voluntary “commitments,” and use the diplomatic-media-NGO circus to try to spread the illusion of progress.

Some leftists portray Copenhagen as the outcome of neoliberalism and market fundamentalism. I see it differently.

The response of the world’s leading capitalist states to the 2008 financial crash – that is, their economic policy since before Copenhagen – cannot be described as market fundamentalism. In 2009-10 the USA invested hundreds of billions of dollars to support the banking system. It deepened its symbiotic relationship with the Chinese dictatorship, that advanced industrialization and urbanization – a counterbalance to the recession in the USA and Europe – with an approach that had little to do with neoliberalism.

Of course neoliberal dogma continued to be used to bolster trade arrangements that favoured the large capitalist states, and to justify “austerity” policies. But the large states continued to intervene in the economy. What they stopped far short of was policies that might have begun to address the threat of global warming.

Plenty has been said about a “green new deal” and “green growth,” by trade union leaders and left parties among others … but measures that might enhance the transition away from fossil fuels – ending subsidies, or state-supported investment in renewable technologies and decentralized energy systems – have been pathetically inadequate or non-existent.