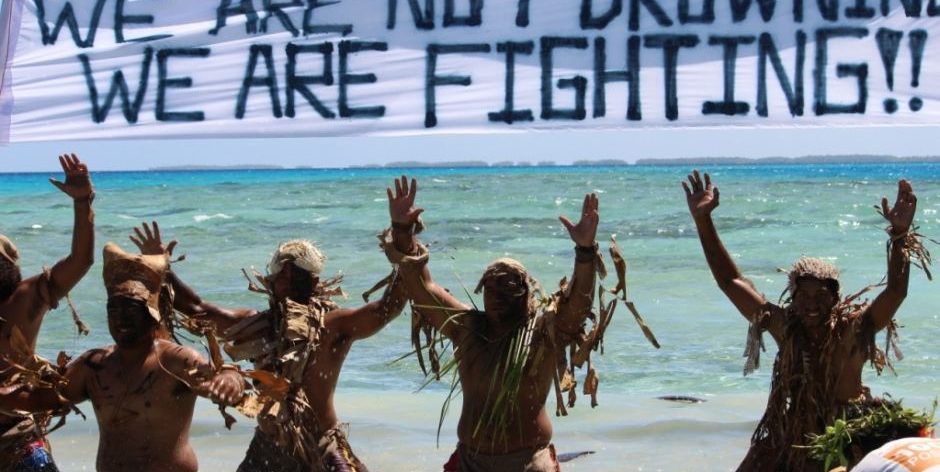 A meeting of the Cartagena Dialogue for Progressive Action took place in the Marshall Islands on April 1. The body is composed of 30 countries working towards a legally binding United Nations climate change convention before of an international summit next year.

Delegates had a chance to witness first-hand the effects of climate change in the host country, a small atoll nation in the Pacific Ocean, where no land rises more than two meters above sea level.

Marshall Islands president Christopher Loeak said in his opening speech: “One month ago today, this atoll and others nearby were hit by the highest king tides in at least 30 years, causing more than 1000 people to flee their homes.”

Loeak pointed out this came, “only seven months after we declared a State of Disaster from a prolonged drought across our northern atolls that left many of our people without food and water”.

He said: “If this is what we see now, what does our future hold? What will king tides, droughts and storms be like in 10 years? In 20 years? In 30 years? I fear that life in the Marshall Islands may soon become like living in a war zone.”

The meeting took place only a few days after the Intergovernmental Panel on Climate Change (IPCC) released its Fifth Assessment Report that confirmed global warming is real, human activity is responsible and the effects are already being felt.

If climate change continues unabated, small island states in the Pacific will suffer more very hot days. Rainfall will decrease in the dry season and rise in the wet season. Extreme rainfall events that now, on average, occur once every 20 years will occur four times every 20 years by 2055 and seven times by 2090.

Ocean swell events that damage coral reefs, cause coastal erosion and inundate land will occur more frequently, especially during years with a strong El Nino, which will become more extreme.

Tropical cyclones will become less frequent but more intense. The movement of aquatic and terrestrial invasive fauna within and across regions will cause significant environmental, economic and social damage.

Perhaps the most disturbing effect for small islands is sea level rise. Warming of 4°C would produce a 0.5 to 2 meter sea-level rise.

This means rising sea levels could displace between 1.2 million and 2.2 million people from the Caribbean, Indian Ocean and Pacific Ocean. Some people have already been forced to flee their homeland.

In 2008, during an exceptionally high inundation event, Carteret Islanders sought refuge on neighboring Bougainville. The next year they began a process of permanent migration there. They have been considered to be the world’s first “climate refugees”.

Despite the real possibility of forced migration due to environmental effects, many Pacific islanders are opposed to being labeled “climate refugees”. This is especially prevalent in Kiribati and Tuvalu, two countries that might be completely inundated by the end of this century.

“The term refugee evokes a sense of helplessness and a lack of dignity that contradicts their very strong sense of pride,” said Jane McAdam and Maryanne Loughry, forced migration scholars investigating the impacts of climate change in the Pacific.

“Refugees flee their own government, whereas the people of Kiribati and Tuvalu have no desire to escape from their countries … They say it is the actions of other countries that will ultimately force their movement, not the actions of their own leaders.

“Refugees are viewed as people waiting helplessly in camps, relying on handouts, with no prospects for the future. Tuvaluans and I-Kiribati don’t want to be seen like that ― they want to be viewed as active, valued members of a community.”

Indeed, small island states have often been at the forefront of pushing the most determined proposals for action against global warming. International agreements have largely failed their demands.

They are also leading by example; countries such as the Marshall Islands are switching to renewable energy sources and exploring new technologies such as ocean thermal energy conversion. But their efforts are hampered by their small economies and lack of resources.

Concept of “climate refugee” does not have a legal basis at the moment. Under the UN Refugee Convention, a refugee must be in danger of persecution in their homeland. This is not the case for those forced to flee for environmental reasons.

A legal case in New Zealand last year showed the lack of international legal protection that awaits the millions who might be forced from their homelands due to climate change. Ioane Teitiota, from Kiribati, argued that NZ immigration authorities should not deport him, even though his visa had expired, because rising seas were threatening his homeland.

High court judge John Priestley acknowledged that Kiribati was suffering environmental degradation due to climate change, but rejected the argument that Teitiota was being “persecuted passively” by the environment.

Priestley wrote: “On a broad level, were they to succeed and be adopted in other jurisdictions, at a stroke, millions of people who are facing medium-term economic deprivation, or the immediate consequences of natural disasters or warfare, or indeed presumptive hardships caused by climate change, would be entitled to protection under the Refugee Convention.

“It is not for the High Court of New Zealand to alter the scope of the Refugee Convention in that regard. Rather that is the task, if they so choose, of the legislatures of sovereign states.”

In April last year, the Refugee Council of Australia implored the Australian government to become the first nation in the world to recognize “climate refugees”. But the plea fell on deaf ears, part of a global trend from developed nations.

New Zealand offers residency to 75 individuals and their families from Kiribati and Tuvalu and 250 from Tonga each year. But the applicant must be between 18 and 45 years old with an offer and proof of employment, in good health, and be proficient in English.

At the moment, the Pacific islands are largely on their own ― struggling against the big, powerful polluters like Australia and the US for the right to continue living on their traditional lands.