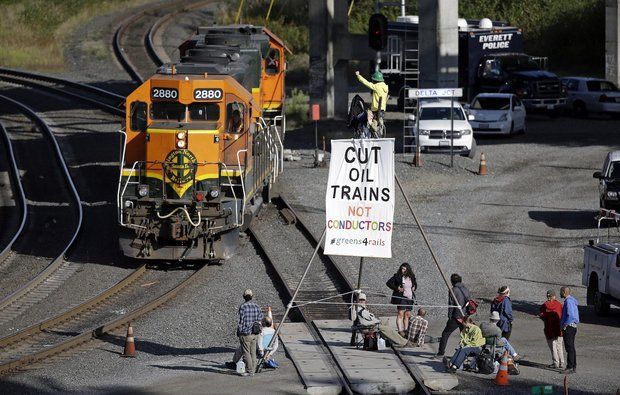 SEATTLE — Five people were arrested Tuesday after tying themselves to poles erected over the railroad tracks at a Burlington Northern Santa Fe yard in Everett that about a dozen demonstrators blocked to protest train shipments of oil and coal and proposed export terminals in the Northwest.

Two women and three men who refused to leave the more than eight-hour protest were taken to the Snohomish County Jail, railroad spokesman Gus Melonas said. He expected they would be charged with trespassing.

Three trains were delayed and others were diverted around the blocked tracks, Melonas said, but no railroad property was damaged.

Organized by the group Rising Tide Seattle, the protesters set up a tripod of poles over the tracks with a woman perched on top, about 20 feet up, while others locked themselves to the three legs. Railroad police used a motorized lift, also known as a cherry picker, to bring the woman down, Melonas said.