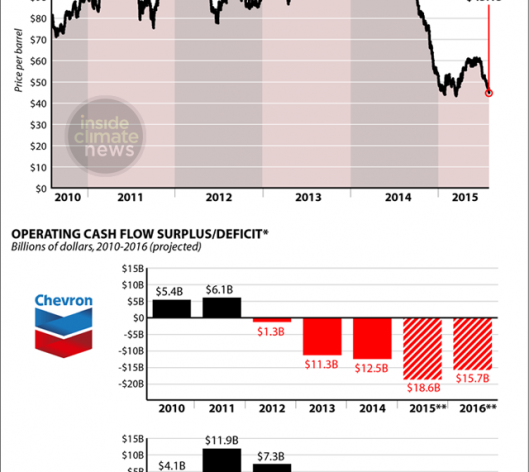 Is the oil industry off a cliff or just in a down cycle?

With the oil industry facing what could be its worst downturn in more than 45 years, the major companies are taking extraordinary, perhaps even desperate, measures to preserve their dividends. This is raising the question of whether the current price slump is just another in a long history of down business cycles, from which oil companies always emerge victoriously, or a sign of more deeply troubled times ahead.

The companies and Wall Street analysts argue that the downturn will reverse as all others have in the past because the world still needs oil, and a lot of it. But some worry that climate change regulations and other new threats could instead force the oil and natural gas business into a tailspin like the one the U.S. coal industry is experiencing.

What side of that argument you fall on will color how you see the oil companies’ current behavior. Oversupply has dropped crude prices to less than half of last year’s highs, and companies are  propping up profits by cutting jobs, selling assets and slashing oil exploration.

They are doing this to avoid reducing dividends—the main reason oil stocks remain an attractive investment. Many investors stick with them because of nearly automatic payouts of 3.7 percent to 6.5 percent— well above the 2.2 percent yield of the benchmark 10-year Treasury note. It’s so crucial to supporting share prices that ExxonMobil, Chevron, BP, Royal Dutch Shell and others “are basically deficit spending” to sustain dividends, according to Fadel Gheit, managing director and senior oil analyst at Oppenheimer & Co.

In addition to market challenges, however,  oil companies face something they’ve never dealt with before: A global call to shift the world’s economies to renewable and low-carbon energy. From the Bank of England to the Pope, international government groups and the world’s largest sovereign wealth fund, there’s a growing push to phase out fossil fuels to save the world from catastrophic warming. This may leave the oil companies with billions of dollars in petroleum reserves that may never be tapped, making them “stranded assets,” some industry analysts say.

“They are leveraging themselves with the hope that the future will look a lot like the past, that oil prices will go back up and things will just go back to the way they were,” said Andrew Logan, director of the oil program at Ceres, a Boston nonprofit that manages a coalition of institutional shareholders with investments in oil companies. “With the issues around climate change and the way technological innovation is going, that seems to me like a very risky bet.

“If the price of oil is in a long-term low, you’re really setting yourself up to be in a bit of a death spiral.”

The oil industry’s troubles stem from a sudden collapse in oil prices last summer. U.S. crude that traded between $90 and $110 a barrel for most of four years crashed to less than $50 because U.S. production soared and total world output swamped global demand. After rallying recently, the global oil price fell back again, closing Wednesday at $45.15.

Many analysts now expect oil prices to stay low at least into next year. In a May report, Goldman Sachs had a worse prediction: That global oil prices would average between $60 and $65 per barrel for several years, and drop to $55 by 2020.

So far, the industry’s long-term commitment to dividend payouts has helped keep investors from fleeing even though growth prospects are grim and many oil company stocks have underperformed the market for several years. Many of the most widely held oil equities are down sharply this year, including ExxonMobil (-16.5 percent), Chevron (-25 percent), Shell (-13.8 percent) and ConocoPhillips (-28.9 percent).

After ExxonMobil and Chevron reported second-quarter earnings Friday that were down by half and by 90 percent, respectively, both companies’ stocks fell nearly 5 percent. That day, Exxon’s market value dropped by $19 billion and Chevron’s fell by $8.6 billion. Chevron shares closed at $84.03 Wednesday, well off its 52-week high of $129.53. Similarly, Exxon—which hit a high of $100.31 in the past year—closed Wednesday at $77.17.

Since prices crashed, oil companies have deferred more than 45 major projects, delaying $200 billion in spending, according to a report from consultant Wood Mackenzie. Projects that are expensive and technologically challenging were hurt the most, including many in the deepwater Gulf of Mexico, Africa and Canada’s oil sands.

Another potential threat comes in December, when world leaders will meet in Paris to negotiate a global climate pact aimed at reducing greenhouse gas emissions enough to prevent the worst effects of climate change. Similar efforts at a global accord have failed in the past. But even a limited agreement to restrain the burning of fossil fuels could undermine confidence in the oil industry’s projections for sustained demand growth.

“If we do get a global deal on climate that locks in a target for reducing emissions … then I think the fossil fuel companies do face a very bleak outlook,” said Mark Lewis, chief energy economist at Kepler Cheuvreux, a Paris-based brokerage.