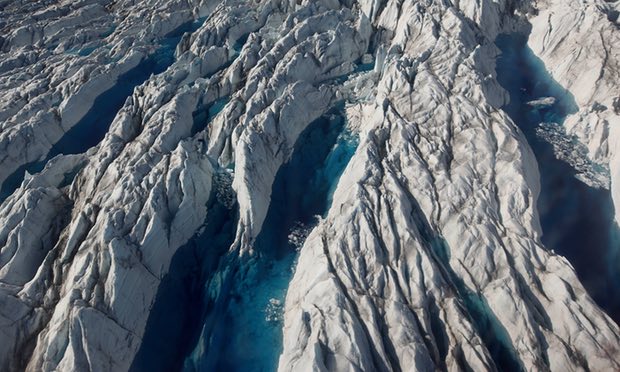 “Greenland by itself has enough ice to cause many meters of sea level rise. If you live near the coast, the question of “when” is really important. This paper suggests that “when” may be sooner than we hoped.”

Okay, so how much is melting of Greenland contributing to sea level rise? Estimates are that about 270 gigatons of water per year are melting. The melting of an ice sheet like that atop Greenland can occur from the surface as air temperatures and sunlight warm the upper layer of ice. It can also occur from the edges as ice shelves collapse and fall into the oceans in large chunks.

For ice-shelf collapse, there’s a complex process that occurs at the bottom of the ice. Part of the ice is floating out over water and part of it is grounded on land. Warm water can get underneath the ice, lift it up, and melt the ice from below.

The bedrock underneath the ice sheet is not flat or gradually changing. There are undulations that rise and fall and change the water-ice-ground connection. Topology called “retrograde” can make it easier for ice to melt and can increase the rate of ice shelf collapse. So, scientists have a real interest in learning about the topology of the land underneath ice sheets so they can better predict ice collapse and sea level rise.

This brings us to a new study published by the American Geophysical Union in a journal called Geophysical Letters Review. The scientists use gravitometry to obtain a high-quality picture of the land underneath a very fast moving part of Greenland ice called the Jacobshavn Isbrae. Basically, the scientists flew gravity sensors across the ice at low altitudes and low velocity. These sensors are called accelerometers and they can be used to determine the x, y, and z gravity components. The measurements of the gravity allowed them to attain the local height of the subsurface with greater accuracy than previously known.