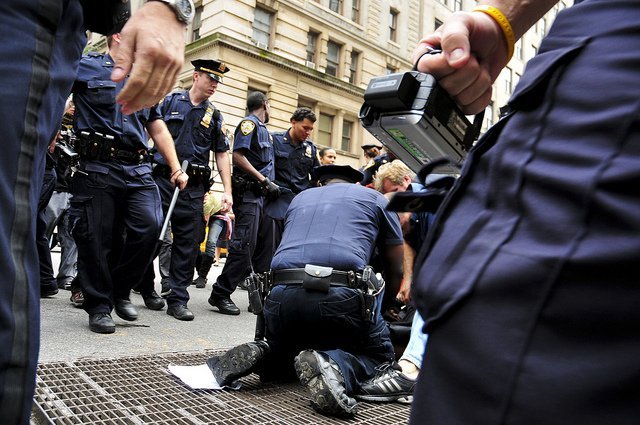 The New York Times on Friday revealed further evidence of widespread domestic spying on the Occupy movement. The surveillance was conducted via “fusion centers” located across the country.

“The new documents roll back the curtain on the fusion centers and show the communications, interactions and emails of a massive national web of federal agents, officials, police, and private ‘security’ contractors,” the Partnership for Civil Justice Fund (PCJF) which obtained the documents and provided them to the Times, said in a statement.

Established by Homeland Security in the years following 9-11 to share information between the likes of the CIA, FBI, Department of Justice (DoJ), Department of Defense (DoD), and state and local law enforcement; fusion centers are tasked with preventing future terror attacks. However, with the rise of Occupy as a mass movement the intelligence network turned its eye on peaceful protesters.

“Rather than being a challenge to terrorism, the fusion centers are a threat to civil liberties, democratic dissent and the social and political fabric of this country,” said PCJF Legal Director Carl Messineo. “The time has long passed for the centers to be defunded.”

The DOD’s Defense Threat Reduction Agency, mandated to “address the entire spectrum of chemical, biological, radiological, nuclear and high yield explosive threats,” was among the government entities monitoring Occupy and sharing intel through the fusion centers.

In a report accompanying the documents they obtained, PCJF notes:

This Pentagon agency that exists to counter threats from weapons of mass destruction circulated material on Occupy including, for example, one document with the subject line: “FW: Alert Update! Chicago … What Police Should Be Learning From The Occupy Protests.” This document shows in an email chain that this article was initially circulated through the subscription website activistmap.com, which is billed as the “Domestic Terrorism Tracking System.” The keywords associated with this Domestic Terrorism Tracking System include: anarchist(s), animal rights, environmentalist, protesters, socialist(s), communist(s), civil disobedience, social justice and global justice, among others.

“Sounds like fun,” replied his colleague Lieutenant Rodney Giacomelli, who suggested they visit the local Baltimore protest encampment “pick up some free food, hear some tunes, and get laid.”

Much of the intel on Occupy was gathered through social media. Of primary concern to law enforcement officials, the documents reveal, were nationwide Black Friday protests that shut down ports in Oakland and a rally staged in New York City against cuts to the U.S. Postal Service.

Boston’s fusion center was particularly active. As the Times describes, it “issued scores of bulletins listing hundreds of events including a protest of ‘irresponsible lending practices,’ a food drive and multiple ‘yoga, faith & spirituality’ classes.:

The reports also listed appearances by people including a professor at the Harvard Divinity School, the linguist Noam Chomsky and an official at the American Civil Liberties Union of Massachusetts, who was to discuss the Patriot Act. Some reports noted that a man scheduled to join in a teach-in at Dewey Square had written a film about Sacco and Vanzetti and wondered whether he was “a known/respected figure within the anarchist movement.” Others described Bill McKibben, an environmentalist and scholar at Middlebury College, stating, “McKibben organized a sit-in near the White House in August of this year to protest construction of a pipeline,” and was arrested but not charged.

McKibben chained himself to the White House fense in a peaceful civil disobedience against the Keystone XL tar sands pipeline. That act of dissent appears to have caught the attention of intelligence gathers. But Georgia Tech law and ethics professor Peter Swire told the Times that even less signifigant offenses like trespassing, “can be enough to trigger surveillance of political groups.”

PCJF has initiated a campaign to pressure Congress and President Obama to defund the fusion centers. You can help blind Big Brother and sign their petion here. To read PCJF’s full report and access the fusion center documents click here.