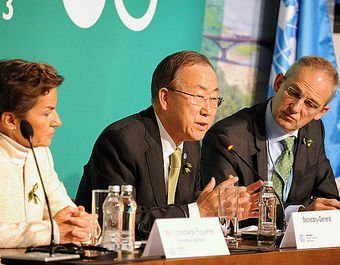 Experts at the Massachusetts Institute of Technology using a sophisticated computer model examined what they think is the most likely outcome of UN climate treaty negotiations and found that the talks are likely to come up short.

Facing a deadline to reach a new treaty by the end of next year in Paris, the world’s nations seem unwilling to make the kind of pledges that would rein in global warming to safe levels by century’s end, the researchers concluded.

“Our analysis concludes that these international efforts will indeed bend at the curve of global emissions” of carbon dioxide and other planet-warming greenhouse gases, they said. “However, our results also show that these efforts will not put the globe on a path consistent with commonly stated long-term climate goals.”

The MIT team reviewed the pollution-reduction commitments that climate delegates from around the world seem likely to bring to the negotiating table. They then cranked those measures through models and found that the atmosphere’s blanket of CO2 would continue to rise much higher than 450 parts per million, the level that might keep the planet from warming beyond 2 degrees Celsius.

Indeed, the team predicted that emissions would grow so fast by the year 2050, that greenhouse gas concentrations would exceed 530 or 580 parts per million by the end of the century. (This summer, concentrations measured at the Mauna Loa Observatory, the world’s longest-running CO2 monitoring station, peaked at above 400 ppm for an entire month. And there is no long-term slackening in sight.)

The pessimistic forecast may put new pressure on world leaders to increase their ambition as they gather in September in New York at a meeting called by UN Secretary General Ban Ki-moon—the goal of which is to give an urgently needed boost to the climate talks.