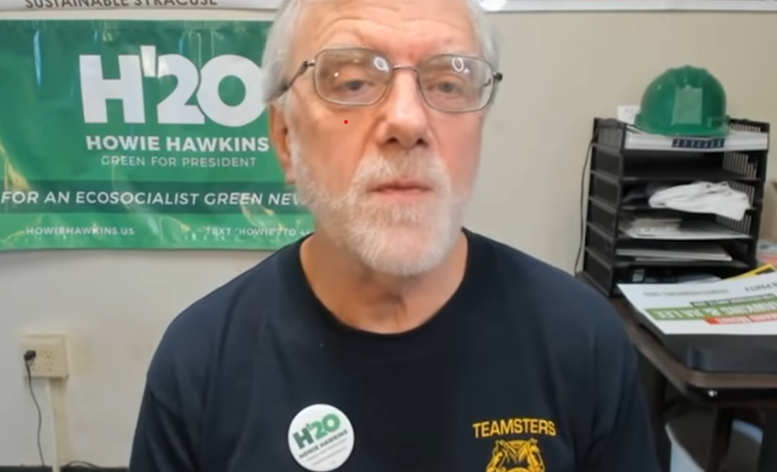 There is much discussion on the left regarding the upcoming Presidential election.  Views range from voting for Biden, with or without holding your nose, voting for Biden only in the “purple” states, to ignoring it. I want to argue for voting for the Green Party candidates, Howie Hawkins and Angela Walker. For those not familiar with them, I would point out that both are blue collar socialists, though Howie is now retired. Howie has been running for office in New York, highlighting his version of the Green New Deal, which is the most eco-socialist version I have seen. Angela Walker is a long time African American activist. She ran for Sheriff when she lived in Milwaukee.  There has been a lot of talk in the Socialist movement now about running open socialist candidates for office. Here they are.

I know there are arguments against supporting Hawkins/Walker. Some say that they can’t win or that the Green Party is problematic or it will help Trump and so on. It is true that the Green Party has its shortcomings and problems.In its defense, I would point out that the Party has been moving to the left.  In 2016, the Party’s national  platform was amended to declare itself an anti-capitalist party   Now the socialists in the Party have organized the Green Party Eco-Socialist Network. In conclusion, I do not believe that a decision to support or not support Hawkins/Walker should be be made on one’s view of the Green Party. Indeed, the biggest reason that some will not support Hawkins/Walker is because they accept the idea of lesser-evilism. Since the 1930s, the majority of socialists have subscribed to the theory of the left/center coalition. I ask you to think about what does the socialist movement have to show for tying itself to any wing of capitalism for 80 years. We know it is possible for Biden to lose since he is such a poor candidate and the platform is so lacking.The left vote cannot save him if he cannot connect with broad ranks of the working class.

In any case, defeating Trump is not the same as defeating  trumpism. Trump is a morbid symptom in an ever more sick society. Trumpism predated Trump and will linger after Trump is gone. Do you have any confidence that a Biden-led Democratic Party will take on trumpism even if Biden wins in November?

Now that Black, Latinx and white workers and youth are rebelling in the streets against police violence, the failing economic and healthcare systems and the failure to address global climate change, it’s more important than ever to present a political alternative to capitalism.  No election is as important as what’s happening in the streets, but having Hawkins/Walker as an alternative shows a way forward.

In conclusion, I would argue that a million votes for Hawkins/Walker would alter the political situation more than the election of Joe Biden.