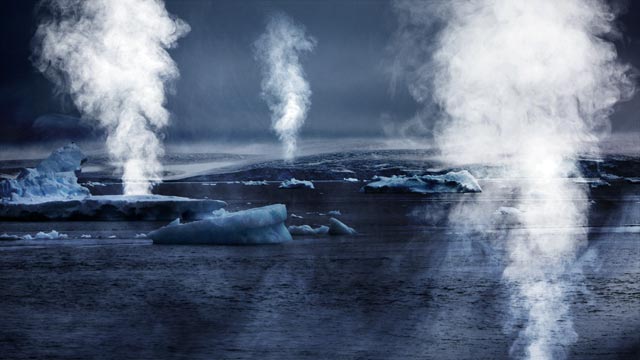 During a recent hike in Washington State’s Olympic National Park, I marveled at the delicate geometry of frost-covered ferns. White crystalline structures seemed to grow from the green leaves, encasing them in a frozen frame of temporary beauty.

Progressing further up into the mountains, I stopped to lunch and sip hot coffee from a thermos while gazing across a river valley at a snow-covered mountainside, sizing up a frozen waterfall for a possible ice climb in the future. Yet I found myself beginning to wonder how many more winters ice would continue to form there.

The disparity of the beauty before me with my troubled thoughts about the planet has found no reconciliation. I had been collecting data and conducting interviews for articles about methane releases in the Arctic for weeks, and pondering the information through the holidays only led me into depression. Going out into the mountains helped, but also provoked grave concerns for our collective future.

“Our climate system is in early stages of abrupt climate change that, unchecked, will lead to a temperature rise of 5 to 6 degrees Celsius within a decade or two.”

To consider the possibility that humans have altered the atmosphere of the earth so drastically as to put our own lives in danger seems, at least emotionally, unfathomable. Given the scale of the planet, one would think, logically, it might not even be possible. Yet the majestic snow-covered peaks near where I live may no longer have glaciers (or even snow) within my lifetime, according to some of the scientists I’ve interviewed.