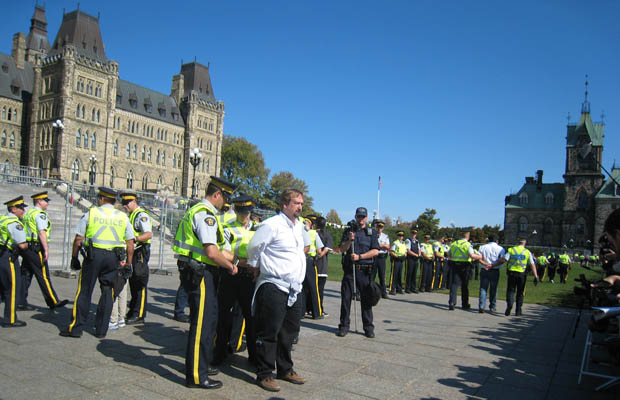 There was a mass arrest on Parliament Hill on Monday during a protest against the Kinder Morgan Pipeline that runs from Alberta to British Columbia.

The protest was organized by a group of young people and students who say twinning the pipeline so it can deliver triple the oil daily is detrimental to Canada’s environment.

“It would have the same climate impact as adding 32 million cars on Canada’s roads, and at a time when we desperately need action on climate change… we can’t sign on to projects like Kinder Morgan,” said Cameron Fenton, an organizer with Climate 101.

99 people were arrested when they crossed over a fence blocking the steps to Parliament Hill, and later charged under the Trespass to Property Act of Ontario.

“Civil disobedience demonstrates the commitment of those taking action and the gravity of the problem. This is one of the biggest problems, if not the biggest problem facing humanity as a whole – it’s our generation, and our children and our grandchildren that are going to feel the consequences,” said Mitchel Vanineveld, who faced arrest.

Kinder Morgan says the $5.4 billion project will provide $45 billion in increased revenues to producers over 20 years and $14.7 billion in additional revenue for government.

The Trudeau government has not said whether or not they will give the green light to the project come December, but that is what the protest is trying to prevent.