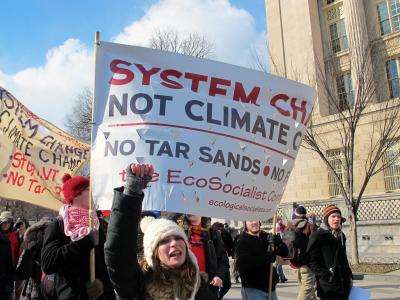 I’m going to start with talking about two events that took place in New York a couple of years ago. The first was a benign, somewhat unremarkable and inconsequential event. The Museum of Modern Art curated what I thought was a pretty interesting exhibit. In response to the epidemic of foreclosures and decimated local economies around the United States, they invited a few architectural firms to design models for five towns in different parts of the country, which would incorporate themes of affordable housing with economic and ecological sustainability.

There were some cool ideas that came out of it. One project was based on Orange, New Jersey, which is a town with no major public transportation system, but is along a regional New Jersey Transit line. The concept they came up with was to create a pedestrian city centered on the transit stop that basically gets rid of roads and cars, and fills in the space with mixed-use buildings that have both affordable housing units, commercial and office space, and public green spaces.

This project would allow people to work in walking distance from where they live. It would get rid of streets, which are an economic burden on a struggling city, and cars, which are an ecological burden on the city and planet. Roofs would be converted into public spaces as well as house energy generators with solar panels, something that is particularly important in New Jersey, the fifth highest energy consumer among the states. And the buildings would be connected at certain places, in order to collectivize building nodes, so that there is more efficiency in things like plumbing and electricity.

Another project turned Keiser, a suburb of Portland, Oregon, into a city that is both denser in terms of inhabitants, but also with three times the amount of public, open space, including a 158-acre nature reserve, urban farms, sky gardens, space for animal habitats, a composting hill, and interior waterfalls that would help provide energy for the town.

There were many other ideas I don’t have time to get into—some more interesting than others—but in general these were pretty cool concepts that addressed the economic realities of towns that have suffered financially, and whose sprawl is both a drain on the environment and a disaster for individual health and lifestyles.

The second event, a few months later, was much more remarkable and much less benign, and that was Hurricane Sandy. Of course, as people know, it didn’t just hit New York, but took nearly 300 lives and wreaked about $68 billion worth of damage across seven counties, destroying entire neighborhoods, crushing or flooding homes, and devastating countless lives. In New York City alone, over 300,000 housing units were destroyed. And many of those who had bought their homes are still paying mortgages on their wrecked, uninhabitable remains.

The super storm made two things unquestionably clear. First, that climate change is not an abstract problem for the future, but is a devastating reality now. And, second, that the people who are bearing the brunt of it are the poor and working class, and disproportionately people of color.

So what is the connection between these two events? Unfortunately, not much—and that’s really the point. There are great ideas and concepts, and people thinking and researching about how to create human-friendly, environmentally sustainable habitats, but then there is reality, and never the twain shall meet.

In fact, there are a lot of things that could have been done in New York to prevent the kind of devastation that we saw during Hurricane Sandy, from basic adjustments and investments in infrastructure to more radical, but still very practical changes—like the proposal to green the coast of the city with wetlands and marshes that can absorb the energy of incoming water during storms. (This is a much more realistic and affordable solution than the idea of building higher and higher sea walls around the city, which is being floated by some politicians.) The fact is that the New York City coastline was expanded many years ago by creating and building out an artificial landfill. Not surprisingly this area is among the most flood prone in the city.

The growing number of superstorms like Sandy and the recent flurry of droughts and wildfires should really be proof enough of not only the alarmingly quickening pace of climate change, but also the devastating impact that it is already having on our lives. And just like the economic crisis, the people least responsible for causing the ecological crisis have and will continue to bear the cost of it.

But the other deeply troubling aspects of the ecological crisis are the so-called “solutions” on offer. At best, we have what might be chalked up to naïve individualism—that by each of us reducing our own carbon footprints we’ll be able to stop global climate change. At worst we have cynical maneuvers to greenwash the same corporations that are profiting hand over fist while destroying the planet. For instance, in New York, we had Toyota, Con Ed, and United Airlines sponsor Earth Day celebrations in April, when in fact the greatest contribution these three corporations could make to the preservation of our planet would be to disappear.

Yet at the same time, it is also a very promising time to be an ecosocialist and an environmental justice activist. There exists right now a tremendous opening to build a real movement that offers both a more radical critique of the crisis and poses radical solutions.