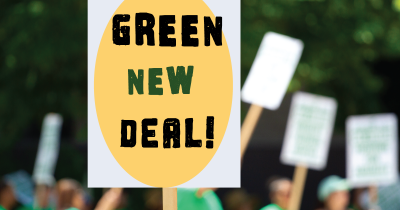 THE GREEN NEW Deal resolution introduced into Congress by Representative Alexandria Ocasio-Cortez and Senator Ed Markey is a manifesto that has changed the terms of the debate over the country’s future. Cutting through the Trump administration’s denials about who is responsible for the extreme weather we already face, it unites the issues of climate change with that of eroding workers’ rights, racism and growing inequality. (At the end of March, the Senate voted against the GND in what has been called a ceremonial stunt.)

The resolution affirms the overwhelming scientific consensus that these are human caused. Further, since the United States is responsible for a disproportionate amount of greenhouse gas emissions, it demands that this society must take the lead in “reducing emissions through economic transformation.”

Noting that climate crisis is just one of many crises we face, it points to declining living standards, wage stagnation, a large racial divide and gender gap. It states that we now have the greatest income inequality since a century ago. It then proposes a 10-year national mobilization to tackle these issues comprehensively. But in offering a way forward, the details are nonetheless vague.

Corporate politicians ranging from centrist Democrats to the Republican establishment have commented that the proposal is too broad, too expensive, too utopian. Trump labelled it socialist and therefore “un-American.”

A video posted by Sunrise, the group pushing for passage of the Green New Deal resolution, shows an exchange between Senator Dianne Feinstein (D-CA) and a group of 14-17 year olds.

When told that scientists have given us a decade to drastically cut carbon emissions, she replied “Well, it’s not going to get turned around in ten years.”

Feinstein then lectured them about the art of the possible. They responded by pointing out they would be living with the consequences of a devastated planet. The video of their encounter was viewed 1.4 million times within its first few hours online. Most viewers saw a seasoned politician challenged by young people who know only a bold plan has a chance of averting disaster.

It’s clear that a broad political debate has opened. In fact, it is clear that politicians running for office in 2019 and 2020 will be forced to discuss what must be done to drastically reduce fossil fuels and at the same time reduce inequality.

This is a sea change from the 2016 election when Bernie Sanders raised climate change as the most important issue facing the country, the only “major party” candidate to do so.

Since the introduction of the GND resolution, other manifestos and statements have emerged. The recently revived activist scientists’ network, Science for the People, calls for a “People’s Green New Deal” campaign, issuing a short statement of support but warning that there will be pressure to water down the heart of the resolution. It proposes five points in order to maintain and strengthen such a mobilization:

• “We aim to collaborate with all of those who have developed the core ideas of the Green New Deal over the years and decades, particularly to ensure we understand the role of militarism in the climate crisis, and to fight for globally just solutions.

• “We stand with frontline communities demanding equitable solutions to the climate crisis, so that no member of our society will be forgotten or unjustly bear the costs of climate change.

• “We stand with trade unions demanding a Just Transition and the creation of millions of green jobs, so that all people may be able to support their families with dignity.

• “We call for a transformation of the economy which redistributes resources from those who led us into this crisis in the first place.”

This statement introduces into the discussion several important issues. First, it emphasizes that change will come through working people and their communities rather than from on high. In fact, it is the corporate elite and their buddies in Congress who have caused this crisis. It is highly unlikely, in the words of the resolution, that businesses will be “working on the Green New Deal Mobilization.”

Second, there is necessary humility about where the core ideas come from — they were not invented by politicians, but come from an environmental justice movement that drew the connections among environmental degradation, the workers who suffer severe health conditions as a result of their unsafe jobs and the communities in which these mines, factories and agricultural industries exist.

Third, the statement calls for deepening the GND resolution’s commitment to frontline communities and workers by calling for a serious discussion about the role of the military. It underscores the resolution’s introduction of the idea that there must be a “just transition” for workers and their communities. The economic transition cannot demand sacrifice from workers and communities.

The articulation of these principles broaden the GND resolution and point a way forward by emphasizing the need to deepen the political discussion. It takes us beyond the “art of the possible” to the values of solidarity, equality, justice and democracy. Although the “People’s Green New Deal” doesn’t raise specific demands around immigration or U.S. responsibility to the Global South, the ideas it raises challenge us to do so.

Likewise, it doesn’t specifically call for a drastic reduction or abolishing of the military budget and the militarization of neighborhoods and schools, but calls for a discussion. Many Americans believe the military is necessary, although they are not aware that it consumes the lion’s share of the discretionary federal budget, supports authoritarian rule around the globe and prevents the possibility of social programs.

This can’t afford to be a leisurely discussion because without dismantling the 700 U.S. bases around the world, along with junking nuclear weapons and the military machine, there is no possibility for a transformation. Just eliminating U.S. military production would reduce CO2 by 70-80 million tons a year.

Not only does the military budget hamper our ability to take on a Green New Deal campaign, but military production is where we can begin to whack carbon emissions.

The People’s Green New Deal Campaign notes the danger of watering down the resolution. Rather than pledging to “keep the coal in the hole and the oil in the soil,” the resolution fails to define specific energy sources. It refers merely to “clean, renewable and zero-emission” energy and seemingly suggests that efficiency by itself will bring us close to our goal. Further, the resolution qualifies the goal by stating “as much as is technologically feasible” four separate times.

In contrast, the Green Party’s plan, first developed nearly a decade ago, calls for 100% renewable energy by 2030, with renewables defined as wind, solar, tidal and geothermal, not gas, biomass or nuclear power. Given the United States’ responsibility as a leading industrialized society, eliminating greenhouse gas emission has to be a serious priority. It also means giving preference to the public sector.

Many cities and towns own their own water and lighting systems; these are the basis for moving to 100% renewable energy. In order to accomplish this task, profit-making utilities will have to be quickly phased out. Again, the Green Party plan is specific: a Renewable Energy Administration would treat energy not as a commodity to be purchased but as a public good.

Since the Congressional GND resolution is simply a statement, not a bill, watering down can occur by proposing technical fixes, whether through carbon fees or employing carbon-capture technology to solve the problem. But there is no quick fix to greenhouse gases and the broader issue of pollution.

As the Climate Justice Alliance points out, “to truly address the interlinked crises of a faltering democracy, growing wealth disparity and community devastation caused by climate change and industrial pollution, we must reduce emissions at their source.

“Allowing for neoliberal constructs such as Net Zero emissions, which equate carbon emission offsets and technology investments with real emissions reductions at source, would only exacerbate existing pollution burdens on frontline communities.

“Such loopholes for carbon markets and unproven techno-fixes only serve to line the coffers of the polluting corporations, while increasing (not reducing) harm to our communities. Our communities can no longer be used as sacrifice zones.”

This means saying “No” to the construction of new fossil fuel systems — pipelines, coal ports, etc. It means moving quickly to build public mass transit and ending production of gas guzzlers. It means prioritizing community and worker participation in redesigning and repurposing our manufacturing capacity.

Such a drastic reorganization of the economy requires a full-throttled campaign. It may involve not only retraining workers to new jobs, but the reduction of the work week to 30 hours for 40 hours pay.

AFL-CIO Labor Councils in Alameda, San Diego and Imperial Counties in California have called for support to the GND along with a few local unions. However, most unions are terrified that in the transition, workers and their families will get the short end of the straw.

That’s how every other restructuring in U.S. history has occurred. There must be a commitment to compensate for job losses and to extensive retraining. “Just transition” must be a guarantee.

Another issue that is rarely discussed in U.S.-based statements is the reality that we must reject the mantra of “growth.” We do not need more things every year!

Hopefully, through this mobilization of our energy we discover happiness is in having control over our lives. This means not only democratic planning and a guarantee against displacement, but having quality public services — housing, health, transportation and education for starters — available to all.

The Democratic Socialists of America’s ecosocialist statement of guiding principles notes, “The future is a public good, not a private luxury.”

Some of these statements and manifestos raise the issue of a radical redistribution of the economy, but while this is certainly true, in fact we must go even further. Capitalism is built on profit, exploitation and growth for its own sake. To change this dynamic, it will be necessary to develop an economy based on new, fundamental ecosocialist principles.

“The capitalist destruction of the environment and the ecosocialist alternative,” a Fourth International statement which Solidarity members participated in writing, was adopted in April 2018. It is a wide-ranging summary of the issues we face. It ends by noting:

“These urgent ecological demands can favor a process of radicalization under the condition that we refuse to limit their objectives by obeying the capitalist market or accepting the ‘competitiveness’ argument.

“Each small victory, each partial advance can immediately bring us to a higher and more radical demand. These struggles on concrete problems are important, not only because partial victories in themselves are welcome, but also because they contribute to the growth of an ecological and socialist consciousness, and promote autonomy and self-organization from below.

This autonomy and this self-organization are the necessary and decisive preconditions for a radical transformation of the world. This means a revolutionary transformation is only possible through the self-emancipation of the oppressed and the exploited: workers and peasants, women, indigenous communities, and all stigmatized because of their race, religion or nationality.

“The leading elites of the system, retrenched behind their barricades, are incredibly powerful while the forces of radical opposition are small. Their development into a mass movement of unprecedented size, is the only hope to stop the catastrophic course of capitalist growth.

This will allow us to invent a desirable form of life, more rich in human qualities, a new society based on the values of human dignity, solidarity, freedom and respect for Mother Nature.”