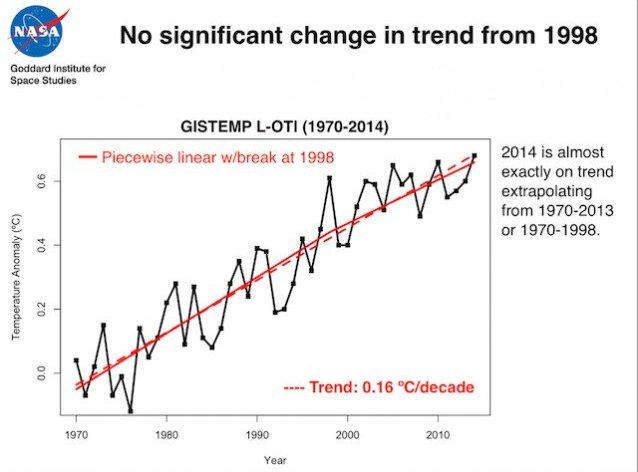 We may be witnessing the start of the long-awaited jump in global temperatures. There is “a vast and growing body of research,” as Climate Central explained in February. “Humanity is about to experience a historically unprecedented spike in temperatures.”

Scientists note that some 90 percent of global heating goes into the oceans — and ocean warming has accelerated in recent years. Leading climatologist Kevin Trenberth of the National Center for Atmospheric Research explained here in 2013 that “a global temperature increase occurs in the latter stages of an El Niño event, as heat comes out of the ocean and warms the atmosphere.”

In March, NOAA announced the arrival of an El Niño, a multi-month weather pattern “characterized by unusually warm ocean temperatures in the Equatorial Pacific.”

How much of a temperature jump should we expect? Last month, Trenberth explained to Living on Earth:

Trenberth says it could mean a rise of two- or three-tenths-of-a-degree Celsius, or up to half a degree Fahrenheit. The change could occur “relatively abruptly,” but then stick around for five or 10 years.

I interviewed Trenberth this week, and he told me that he thinks “a jump is imminent.” When I asked whether he considers that “likely,” he answered, “I am going to say yes. Somewhat cautiously because this is sticking my neck out.”

Trenberth explained that it’s significant the Pacific Decadal Oscillation (PDO) “seems to have gone strongly positive” because that is “perhaps the best single indicator to me that a jump is imminent.” During a PDO, he explains, “the distribution of heat in the oceans changes along with some ocean currents.”