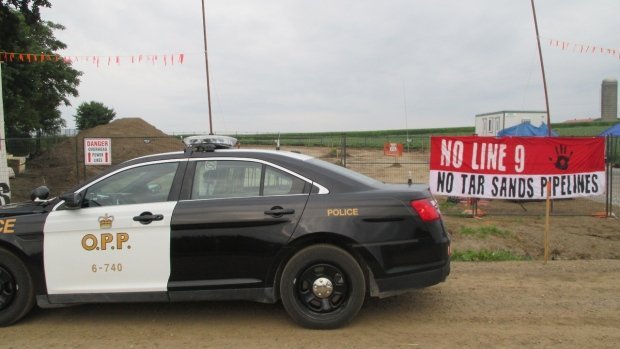 Protesters set up a blockade at an Enbridge pipeline site in southwestern Ontario on Tuesday, disrupting work on what is called Line 9.

The demonstration at Innerkip north of Woodstock started early in the morning and was aimed at preventing installation of a valve.

Protest spokeswoman Rachel Avery said the valve was being installed near the Thames River, which isn’t adequately protected from the risk of a spill.

“We’re very concerned about the severe impacts of Line 9 on waterways, including the nearby Thames river,” Avery said.

Provincial police said there were about 25 protesters involved.

Protesters say they are concerned about the Line 9 pipeline’s impact on waterways, specifically the nearby Thames River in Ontario. (Tumblr)

The group has no formal name but Avery said the blockade is dubbed “Dam Line 9!” and has attracted people from “numerous” communities in southwestern Ontario.

Enbridge’s (TSX:ENB) Line 9 carries crude oil between Sarnia, Ont., and Montreal. The company plans to reverse the flow of oil and increase the pipe’s capacity, but opponents argue the pipeline puts the environment at risk and there has been little consultation with aboriginal communities.

Enbridge confirmed Tuesday’s work interruption and said workers were moved to another project for the day.

Spokeswoman Kristen Higgins said the site is “secured” and that Enbridge respects the rights of individuals and groups to voice their concerns.