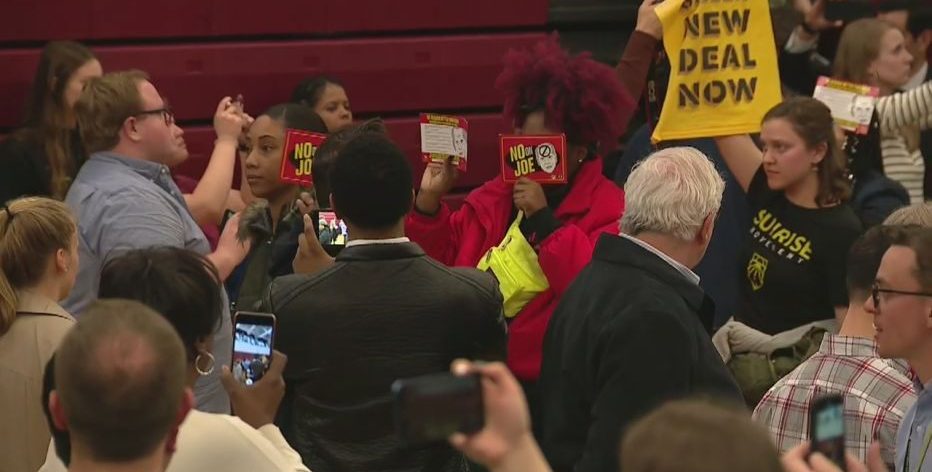 Biden’s attempt to take undeserved credit for the Paris Agreement only scratches the surface of his questionable decisions as vice president.

On Super Tuesday, Joe Biden did relatively well with people who cited climate change as their top issue in the election. The former vice president received 34 percent of those climate voters according to Washington Post exit polling, while his competitor Senator Bernie Sanders received just 28 percent. It’s not entirely clear why.

Biden’s climate platform—which would invest $1.7 trillion for the United States to become carbon neutral by 2050—has been graded with a B+ by environmental activist group Greenpeace USA, a 30.5/48 by progressive think tank Data for Progress, and a 75 out of 200 (an F) from the youth-led climate group Sunrise Movement. Altogether, that’s not terrible. But it’s also significantly worse than his competitors.

Sanders’s climate plan—a $16.3 trillion set of proposals to reach net-zero emissions by 2030 with a Green New Deal—has received an A+, 45/48, and a 183 out of 200 (A), respectively, from the same groups. Sunrise endorsed him. 350 Action, the electoral arm of emissions-curbing advocacy group 350.org, endorsed both Sanders and Senator Elizabeth Warren, who ended her campaign last Thursday and scored just below Sanders on the same scorecards.

Biden and Sanders, the last major candidates standing, were the top performers among climate voters last Tuesday. Young voters—the demographic most concerned with climate, according to Gallup—went overwhelmingly for Sanders, who won 60 percent of voters under 30 that day. But among voters of all ages who ranked climate as their top concern, Biden bested Sanders, albeit in a small sample size. Meanwhile, CNN exit polling suggests Bloomberg and Warren took a combined 40 percent of climate-concerned voters in Massachusetts. In California, their combined performance among those voters outranked Sanders’s, even as he won the state overwhelmingly.

Whom will climate voters in the remaining states—especially those who go to the polls on Tuesday—flock to now? It could make the difference between a revived Sanders campaign or a coronation for Biden.

Biden has an ambiguous record on climate policy, at best. His campaign in general has leaned hard on his time in the Obama administration, and his commitment in particular to the Paris Agreement. Biden has boasted of and been credited with having played a major role in negotiating the global climate pact while serving as vice president in the “Obama-Biden administration,” claiming in the most recent debate that he was able to “convince” Chinese President Xi Jinping that he “should join the international agreement at the Paris Agreement,” a tale he repeated after his big night on Super Tuesday. Though his phrasing was characteristically unclear, Biden appeared to be arguing that he helped initiate bilateral cooperation between the U.S. and China as a prelude to the Paris Agreement negotiations, which was critical to the deal’s success. But none of the six former White House officials interviewed by E&E News last month recall him or his staff playing a significant role in the Paris Agreement’s passage.