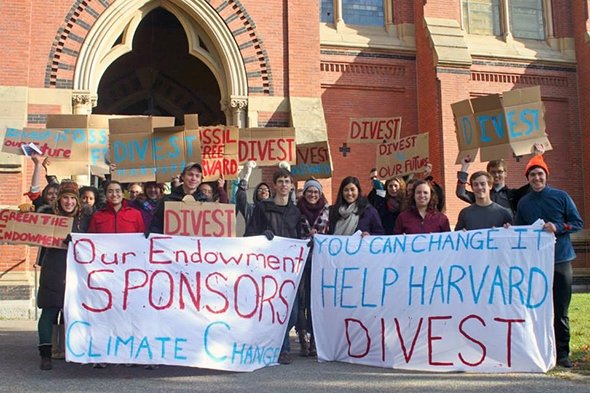 On inconvenience and revolutionary action

In September 2013, the student organizers of Divest Harvard, a campaign that was already a year old by that time, asked me to speak at the first demonstration of alumni for fossil-fuel divestment (I live near Boston, and I’d been engaged with the campaign from early on, so I was an easy get). As an erstwhile member of the mainstream media, it’s fair to say I’m not a seasoned activist. I haven’t given a lot of speeches in my time, certainly not at rallies. So it was strange, and very humbling, to stand in front of Mass. Hall, where I’d lived as a freshman, and speak to a group of perhaps 150 alums and students, and even a few faculty (who have since stepped up in a significant way). I want to offer those words again here. Because, as I watch the Harvard Corporation not only reject divestment but actually increase the university’s holdings in fossil-fuel companies—even as institutions like Stanford and the Rockefeller Brothers Fund show leadership by taking principled action in the opposite direction—I realize that I would give the same speech today. Every word.

In the fall and spring of 1986 and ’87, as a freshman at this college, I lived on the top floor of Massachusetts Hall. My dorm room—right up there, in the top northeast corner, two floors above the President’s offices—faced out over the Yard, and I have vivid memories of large protests demanding that this university divest from companies doing business in apartheid South Africa. Suffice it to say, it got loud out here. Very, very loud.

And if any of you, here today, were out here then—thank you. I confess, I was too self-absorbed as a freshman to join you. I knew you were right, but I lacked the courage of my convictions. The kind of courage that these students here today have shown in this campaign to divest from fossil fuels. The courage to stand and speak truth to power.

Now, in the past year, since this campaign was launched, we’ve heard from a few critics—and, frankly, from a few cynics. And that’s just fine. We’re getting their attention.

And one of the things we’re told is that fossil-fuel divestment will be ineffective as a strategy to address climate change—that the economics of it won’t alter the behavior of these companies, the wealthiest on Earth. But this misreads—or fails to read—our clearly stated reasons for divestment. The leverage we aim to bring is not simply economic. It’s moral.

And on that score, we’re also told that we have the wrong target—that the fossil fuel industry isn’t the enemy, that we ourselves, as consumers—who, yes, in spite of our best efforts, still depend on fossil fuels—we are the enemy. As though the fossil fuel companies are somehow blameless—despite everything we know to the contrary. And as though the working, poor, and struggling families of this country and every other country are somehow responsible for solving the climate crisis, which they did nothing to create, by themselves—even as they’re forced to rely on fossil fuels, through no fault of their own, simply to put food on the table. This is a basic issue of justice. The wealthiest corporations on Earth have the power to help solve the crisis they have done so much to create, and from which they have profited—and continue to profit—so richly. And they must use it. Not stand in the way of solutions. Not, for God’s sake, deceive the public, deny science, and obstruct solutions.

So we’re told these things, but at the end of the day, what we’re mainly told is that divestment is…well, you see, children, it’s complicated. It’s difficult—for various technical reasons.

No, in fact, it’s really not. It’s not. I mean, come on, this is Harvard—I think we can figure it out.

In fact, what this really means is that Harvard just can’t be bothered. “Climate change, yes, it’s very serious,” we’re told. “Indeed, Harvard’s faculty is contributing much to our understanding of climate change and its solutions. But you see, children, it doesn’t rise to such a level that we would take any such radical or extreme course of action as divestment.”

Only in the rarest of circumstances, we’re told—indeed, only in “extraordinarily rare circumstances,” in the words of the administration—will the university go so far as to divest.

This is what all of us have heard. As though to say, Harvard is a busy place. It has a lot of important things on its plate. All you climate change people will simply have to understand.

So let’s consider this language, this boilerplate, emanating from Massachusetts Hall. Only in “extraordinarily rare circumstances” will the university divest.

Presumably such circumstances would include—oh, I don’t know—humans melting the Arctic.

Presumably such circumstances would include humans rapidly acidifying the oceans—and raising them.

Presumably such circumstances would include burning the planet’s great forests. Drying up its great rivers. Flooding its great cities.

Presumably such “extraordinarily rare circumstances” would also include the fact, famously reported by Bill McKibben, class of 1982, that the fossil fuel industry controls in its reserves more than five times the amount of carbon that climate science tells us can be burned, over the next four decades, if we’re to have a chance of preserving a livable climate this century—and the fact that the industry shows every intention of extracting and burning every ounce of it, unless and until somebody stops them, or makes it unprofitable for them to do so.

In other words, it is perhaps among the rarest and most extraordinary of circumstances that the power of a single industry holds the fate of the planet and of humanity in its grip.

Presumably these circumstances are rare and extraordinary.