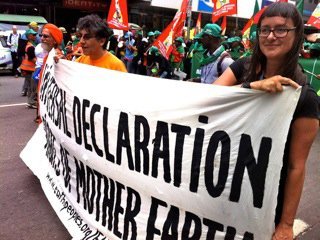 From the last chapter of the Green Shock Doctrine…Rather than define anew a list of solutions to the climate crisis, this section will put forward statements developed by social movements from around the world on the topic of real solutions. These statements were developed by hundreds of organizations, activists ,and social movements from all over the world who discussed these issues at great length in a variety of venues.

Excerpts from the Cochabamba Peoples’ Agreement

The capitalist …regime of production and consumption seeks profit without limits, separating human beings from nature and imposing a logic of domination upon nature, transforming everything into commodities: water, earth, the human genome, ancestral cultures, biodiversity, justice, ethics, the rights of peoples, and life itself. It is an imperialist system of colonization of the planet.

The statement developed by organizations from all parts of the world in Cochabamba, Bolivia at the World Peoples’ Conference on Climate Change and the Rights of Mother Earth in April 2010 clearly defined the problems facing the global community in addressing climate change and put forward solutions.

The corporations and governments of the so-called ‘developed’ countries, in complicity with a segment of the scientific community, have led us to discuss climate change as a problem limited to the rise in temperature without questioning the cause, which is the capitalist system.

Humanity confronts a great dilemma: to continue on the path of capitalism, depredation, and death, or to choose the path of harmony with nature and respect for life.

We propose to the peoples of the world the recovery, revalorization, and strengthening of the knowledge, wisdom, and ancestral practices of Indigenous Peoples, which are affirmed in the thought and practices of buen vivir “Living Well,” recognizing Mother Earth as a living being with which we have an indivisible, interdependent, complementary and spiritual relationship.

To face climate change, we must recognize Mother Earth as the source of life and forge a new system based on the principles of:

In order to coordinate our international action and implement the results of this ‘Accord of the Peoples,’ we call for the building of a Global People’s Movement for Mother Earth, which should be based on the principles of complementarity and respect for the diversity of origin and visions among its members, constituting a broad and democratic space for coordination and joint worldwide actions.

Additional solutions advanced in Cochabamba and through other international strategy meetings include:

Real solutions, as opposed to false, market-based solutions, will not be adopted until we overcome the existing unjust political and economic system. [We must] change the neo- liberal and corporate-based economy which stops us from achieving sustainable societies. Corporate globalisation must be stopped. We will take our struggle forward not just in climate talks, but on the ground and