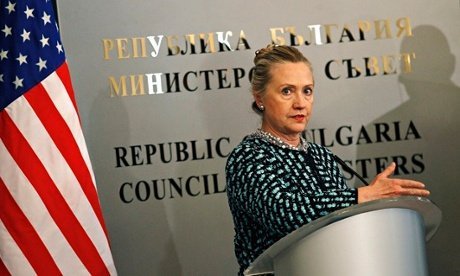 How Hillary Clinton’s State Department sold fracking to the world

One icy morning in February 2012, Hillary Clinton’s plane touched down in the Bulgarian capital, Sofia, which was just digging out from a fierce blizzard. Wrapped in a thick coat, the secretary of state descended the stairs to the snow-covered tarmac, where she and her aides piled into a motorcade bound for the presidential palace. That afternoon, they huddled with Bulgarian leaders, including prime minister Boyko Borissov, discussing everything from Syria’s bloody civil war to their joint search for loose nukes. But the focus of the talks was fracking. The previous year, Bulgaria had signed a five-year, $68m deal, granting US oil giant Chevron millions of acres in shale gas concessions. Bulgarians were outraged. Shortly before Clinton arrived, tens of thousands of protesters poured into the streets carrying placards that read “Stop fracking with our water” and “Chevron go home.” Bulgaria’s parliament responded by voting overwhelmingly for a fracking moratorium.

Clinton urged Bulgarian officials to give fracking another chance. According to Borissov, she agreed to help fly in the “best specialists on these new technologies to present the benefits to the Bulgarian people.” But resistance only grew. The following month in neighbouring Romania, thousands of people gathered to protest another Chevron fracking project, and Romania’s parliament began weighing its own shale gas moratorium. Again Clinton intervened, dispatching her special envoy for energy in Eurasia, Richard Morningstar, to push back against the fracking bans. The State Depart­ment’s lobbying effort culminated in late May 2012, when Morningstar held a series of meetings on fracking with top Bulgarian and Romanian officials. He also touted the technology in an interview on Bulgarian national radio, saying it could lead to a fivefold drop in the price of natural gas. A few weeks later, Romania’s parliament voted down its proposed fracking ban and Bulgaria’s eased its moratorium.