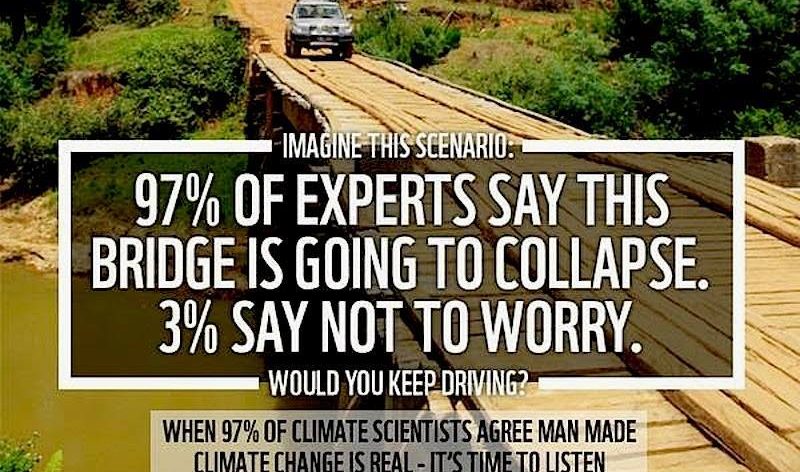 Those who reject the 97% expert consensus on human-caused global warming often invoke Galileo as an example of when the scientific minority overturned the majority view. In reality, climate contrarians have almost nothing in common with Galileo, whose conclusions were based on empirical scientific evidence, supported by many scientific contemporaries, and persecuted by the religious-political establishment. Nevertheless, there’s a slim chance that the 2–3% minority is correct and the 97% climate consensus is wrong.

To evaluate that possibility, a new paper published in the journal of Theoretical and Applied Climatology examines a selection of contrarian climate science research and attempts to replicate their results. The idea is that accurate scientific research should be replicable, and through replication we can also identify any methodological flaws in that research. The study also seeks to answer the question, why do these contrarian papers come to a different conclusion than 97% of the climate science literature?

This new study was authored by Rasmus Benestad, myself (Dana Nuccitelli), Stephan Lewandowsky, Katharine Hayhoe, Hans Olav Hygen, Rob van Dorland, and John Cook. Benestad (who did the lion’s share of the work for this paper) created a tool using the R programming language to replicate the results and methods used in a number of frequently-referenced research papers that reject the expert consensus on human-caused global warming. In using this tool, we discovered some common themes among the contrarian research papers.

Cherry picking was the most common characteristic they shared. We found that many contrarian research papers omitted important contextual information or ignored key data that did not fit the research conclusions. For example, in the discussion of a 2011 paper by Humlum et al. in our supplementary material, we note,

The core of the analysis carried out by [Humlum et al.] involved wavelet-based curve-fitting, with a vague idea that the moon and solar cycles somehow can affect the Earth’s climate. The most severe problem with the paper, however, was that it had discarded a large fraction of data for the Holocene which did not fit their claims.

We found that the ‘curve fitting’ approach also used in the Humlum paper is another common theme in contrarian climate research. ‘Curve fitting’ describes taking several different variables, usually with regular cycles, and stretching them out until the combination fits a given curve (in this case, temperature data). It’s a practice I discuss in my book, about which mathematician John von Neumann once said,