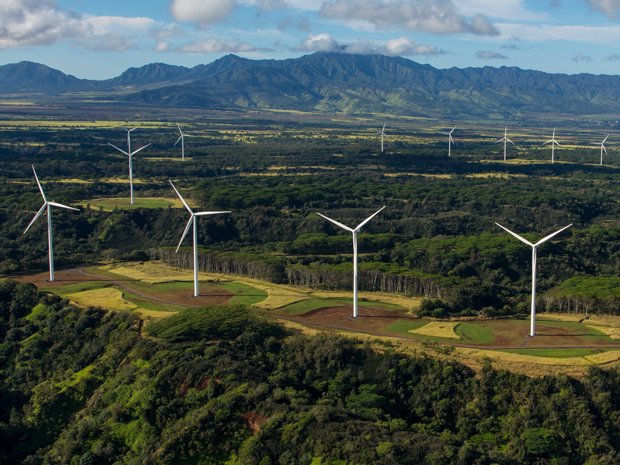 Hawaii’s legislature voted yesterday to stake the state’s future on renewable energy. According to House Bill 623, the archipelago’s power grids must deliver 100 percent renewable electricity by the end of 2045. If the compromise bill is signed by the governor as expected, Hawaii will become the first U.S. state to set a date for the total decarbonization of its power supply.

Renewable energy has been booming since 2008 when the state set a goal of making renewables 40 percent of its power mix by 2030, and government and utility incentives ignited wind power and solar installations. By the end of 2013, renewable energy had jumped from 7.5 percent to 18 percent of the state’s capacity. HB623 seeks to extend and turbo-boost that trend, calling for 30 percent renewables in 2020 and 70 percent by 2030 en route to the final leap to 100 percent.

That last jump could be difficult, says Peter Crouch, a power grid simulation expert and dean of engineering at the University of Hawaii’s flagship Manoa campus. “Today I don’t know whether we can do it,” he says.

Crouch has nevertheless championed the 100 percent renewables goal as a must-do leap of faith. “Without a goal, Hawaii will never get real and grapple with the issues that it needs to in order to get this done,” says Crouch.

Hawaii may be a leader for the U.S. states, but it’s not the only jurisdiction catching the 100-percent-renewables wave. As Crouch notes in an editorial he co-wrote for the Honolulu Star Advertiser in March, other municipalities going for it it include cities such as San Francisco and San Jose (within the next decade). Denmark hopes to be, by 2035, the first country to kick the carbon habit.

For Japan’s Fukushima prefecture, which set itself a 2040 deadline for relying solely on renewables, the switch is about rebuilding hope in the future. When I visited Koriyama, Fukushima’s commercial center, last year, the mayor, Masato Shinagawa, described renewable power as a “must-succeed mission” to rebuild a region shattered by the nuclear reactor meltdowns at TEPCO’s Daiichi nuclear plant in 2011. He called the resurgence of solar power in Japan nothing less than the “Prometheus of the 21st Century.”

The hopefulness is contagious. Costa Rica’s striving for 100 percent renewable power went viral in March when state utility Grupo ICE revealed that the country’s grid had been fossil-free since the beginning of 2015 thanks to bumper rains that filled hydropower reservoirs to the brim. Last month Grupo ICE projected that its fossil-fueled plants would supply just 2.9 percent of power in 2015 as a whole, and new hydro, wind and geothermal power in the offing should put the final stake in its fossil fuel habit.

According to Crouch, Hawaii’s push for 100 percent renewables is propelled by a blend of economic, social, and environmental factors. The economics lie in the state’s historic reliance on imported diesel fuel, which has left Hawaiians paying power rates roughly three times the mainland U.S. average.

Environmental factors—the abundance of renewable energy resources including wind, solar, geothermal, hydro and ocean power, plus acutely-felt threats posed by climate change such as sea level rise and wilder weather—are mutually reinforcing reasons to move quickly. Crouch says one feels far more aware of climate change and more vulnerable to it living in Hawaii—a difference that struck him as soon as he moved out from the mainland in 2006. “While I was well versed in issues like global warming, it wasn’t until I got to Hawaii that the fact that this is happening to us actually registered,” says Crouch.

For example, Crouch says, much of Hawaii’s development is near the water, and most Hawaiians are familiar with projections showing downtown Waikiki under water within a century. “One of the economic drivers of Hawaii could be submerged. That’s a very real thing,” says Crouch.

He adds that help will be much slower to arrive if Hawaii is pounded by climate-enhanced storms. One can see how that would put a sharper focus on the IPCC’s latest assessment, which calls for decarbonization of the world’s power supplies by mid-century in order to limit global warming to less than 2 °C by 2100.

If the allure and mission of renewable energy for Hawaii is clear, the path to a 100 percent renewable grid is far less so, according to Crouch and his colleague Anthony Kuh, who leads the University of Hawaii’s Renewable Energy and Island Sustainability program. As a recent article in Yale Environment 360 noted, technical and regulatory hurdles have recently slowed the state’s renewables growth.

Both Crouch and Kuh are counting on technology advances that will be driven in part by the 100 percent renewable goal. Smarter grid design and operation is a rich area of study that is already starting to smooth the integration of variable and distributed renewable energy energy sources. For example, a novel tweak to rooftop solar system inverters recently convinced local utility Hawaiian Electric Company (HECO) that it could manage the integration of more rooftop capacity. And even smarter inverters that can dynamically manage the voltage of distribution lines are nearing the market.

Energy storage also looks likely to play an expanding role. On several islands, plans are already being drawn up for advanced pumped storage hydropower plants that deftly flip between charge and discharge to balance shifting wind or solar power.

Crouch and Kuh are less confident that Hawaiians will embrace interconnecting the islands’ hitherto isolated power grids to enhance the sharing of renewable energy resources. Uniting Hawaii’s grids via subsea cables was recently a goal for NextEra Energy, the Florida-based utility now seeking to acquire HECO. But the University of Hawaii professors say subsea cabling could be costly and runs counter to popular interest in building self-sustaining communities.

Another energy project that may run up against the 100 percent renewable goal is importing liquefied natural gas (LNG) for power generation. The use of gas-fired plants has risen dramatically in the mainland U.S., and is expected to accelerate further as regulations such as the Environmental Protection Agency’s Clean Power Plan shutter more coal-fired power plants. But LNG-fired gas plants will be harder to justify in Hawaii if they must shut down by 2045.

As Crouch puts it: “Why invest in LNG infrastructure if you’re going to eventually have to do something else? You might as well take that investment and put it in renewables.”

Will other U.S. states follow Hawaii’s lead? It is a hard notion to imagine at present, as leaders in Congress fight to block the EPA’s coal-cutting Clean Power Plan and the North American Electric Reliability Corporation asserts that poorly-coordinated implementation will cause blackouts.

Still, there are a number of states that have set aggressive goals for reducing carbon emissions by 2050. Both New York and California are committed to slashing carbon emissions 80 percent below 1990 levels by then. Carbon markets and other mechanisms could translate those carbon reductions into massive expansions of renewable power.

Direct goals akin to Hawaii’s may also be in the offing. California governor Jerry Brown has called for his state to get 50 percent of its power from renewables by 2030. According to the Palm Springs-based Desert Sun newspaper, a bill codifying Brown’s proposal is “almost certain to pass” the state legislature.