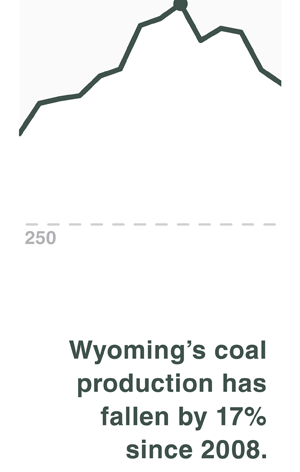 Introductory note by Vancouver Ecosocialists: Much of the planned expansion of coal exports from the ports of Vancouver and Prince Rupert  is the therrmal coal that is strip mined in Wyoming. The following article looks at the dim commercial prospects for therrmal coal.

Of note, also, is the shuttering of metallurgical coal mining in British Columbia. World prices for that product have dropped to $100 per ton from $300 per ton four years ago. A Business Vancouver article several days ago reports that the U.S. firm Walter Energy is shutting down production at its mines in and around Tumbler Ridge, BC. The shutdown of the Wolverine mine has put 415 workers out of work. Another 280 are to be laid off in July from the nearby Brule mine. Last year, the company “temporarily” closed its Willow Creek mine and laid off 250.

Teck Resources is weighing whether to reopen its Quintette metallurgical coal mine. It has been closed since the year 2000. Meanwhile, the infamous HD Mining that wants to hire workers from China to do its underground work is delaying proceeding.

All this also means layoffs of workers at the Ridley Island coal terminal in Prince Rupert.

So much for all the “jobs” that coal is supposed to create. Union leaders in British Columbia who are supporting increasing the export of therrmal coal to Asia in the name of creating a handful of transportation jobs in Canada might look instead at the vast job creation potential of shifting to a sustainable and environmentally aware economy.

If you’re a coal junkie, you’ve probably read quite a few press accounts touting the bright future for Powder River Basin [Wyoming] coal. This story from Gilette, Wyoming, for example, predicts a resurgence in demand for the low-rank coal produced in the region. This one argues that coal is making a comeback, after years of losing ground to natural gas. This one forecasts “tremendous” demand for the region’s dirtiest fuel. I could go on and on.

Articles of this ilk generally offer breathless quotes from coal industry executives, and point to a few factors, such as rising natural gas prices or the cold winter, that make a rapid rise in coal demand seem plausible. But what these articles don’t do is provide much supporting data. And when you look at the actual production figures from Western coal country, a very different story emerges. After peaking in 2008, coal production in Wyoming has fallen by 17 percent. And if I’m right, those trends won’t be reversing themselves any time soon.