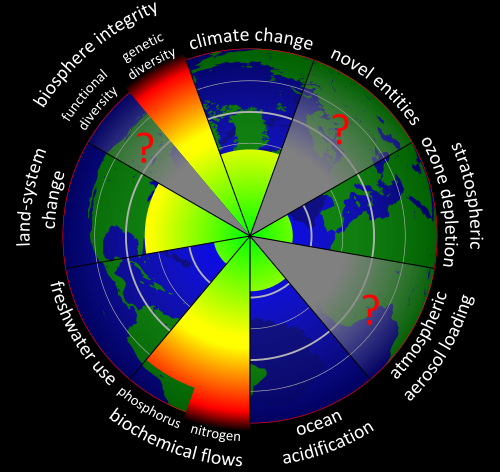 Humanity today is confronted with what might be called the Great Capitalist Climacteric. In the standard definition, a climacteric (from the Greek klimaktēr or rung on the ladder) is a period of critical transition or a turning point in the life of an individual or a whole society. From a social standpoint, it raises issues of historical transformation in the face of changing conditions.1 In the 1980s environmental geographers Ian Burton and Robert Kates referred to “the Great Climacteric” to address what they saw as the developing global ecological problem of the limits to growth, stretching from 1798 (the year of publication of Thomas Malthus’s Essay on the Principle of Population) to 2048, 250 years later. “Applied to population, resources, and environment throughout the world,” the notion of a Great Climacteric, they wrote, “captures the idea of a period that is critical and where serious change for the worse may occur. It is a time of unusual danger.”2

I will use the term the Great Capitalist Climacteric here to refer to the necessary epochal social transition associated with the current planetary emergency. It refers both to the objective necessity of a shift to a sustainable society and to the threat to the existence of Homo sapiens (as well as numerous other species) if the logic of capital accumulation is allowed to continue dictating to society as a whole. The current world of business as usual is marked by rapid climate change, but also by the crossing or impending crossing of numerous other planetary boundaries that define “a safe operating space for humanity.”3 It was the recognition of this and of the unprecedented speed of Earth system change due to social-historical factors that led scientists in recent years to introduce the notion of the Anthropocene epoch, marking the emergence of humanity as a geological force on a planetary scale.4 As leading U.S. climatologist James Hansen explains, “The rapidity with which the human-caused positive [climate] forcing is being introduced has no known analog in Earth’s history. It is thus exceedingly difficult to foresee the consequences if the human-made climate forcing continues to accelerate.”5

With the present rate of carbon emission, the world will break the global carbon budget—reaching the trillionth metric ton of combusted carbon and generating a 2°C increase in global average temperature—within a generation or so.6 Once we reach a 2°C increase, it is feared, we will be entering a world of climate feedbacks and irreversibility where humanity may no longer be able to return to the conditions that defined the Holocene epoch in which civilization developed. The 2°C “guardrail” officially adopted by world governments in Copenhagen in 2009 is meant to safeguard humanity from plunging into what prominent UK climatologist Kevin Anderson of the Tyndall Center for Climate Change has called “extremely dangerous” climate change. Yet, stopping carbon emissions prior to the 2°C boundary, Anderson tells us, will at this point require “revolutionary change to the political economic hegemony,” going against the accumulation of capital or economic growth characteristics that define the capitalist system. More concretely, staying within the carbon budget means that global carbon emissions must at present be cut by around 3 percent a year, and in the rich countries by approximately 10 percent per annum—moving quickly to zero net emissions (or carbon neutrality). For an “outside chance” of staying below 2°C, Anderson declared in 2012, the rich (OECD, Annex I) countries would need to cut their emissions by 70 percent by 2020 and 90 percent by 2030.7

Yet, despite the widespread awareness of the planetary emergency represented by global warming, carbon emissions have continued to rise throughout the world. The failure of capitalism to implement the necessary cuts in carbon dioxide can be explained by the threat that this poses to its very existence as a system of capital accumulation. As a result civilization is faced by a threat of self-extermination that over the long run is as great as that posed by a full nuclear exchange—and in a process that is more inexorable. The present reality of global capitalism makes it appear utopian to call for a revolutionary strategy of “System Change Not Climate Change.” But the objective of stopping climate change leaves the world with no other option, since avoiding climate-change disaster will be even more difficult—and may prove impossible—if the global population does not act quickly and decisively.

Some observers have been quick to conclude that 2°C will inevitably be crossed given prevailing social reality and the failure of current climate negotiations, and that we should therefore simply accept this and shift the target, choosing to stop climate change before it reaches a 3°C or a 4°C increase. This is a view that the World Bank has subtly encouraged.8 It is necessary, however, to take into account the likely non-linear effects of such global warming on the entire Earth system. Beyond 2°C, the level of uncertainty, and the threat of uncontrollable Earth warming due to “slow feedbacks” and the crossing of successive thresholds (tipping points), are magnified enormously.9 Human actions to cut greenhouse gas emissions might then come too late, not simply in the sense of an increase in catastrophic events such as extreme weather or the effects of sea level rise, but also in the even more ominous sense of humanity’s loss of the power to stabilize the climate (and civilization). We do not know when and where such a global tipping point will be reached, but today’s climate science tells us that it is much closer to a 2°C increase than was thought when that boundary was originally proposed. What was once believed to be “dangerous climate” change arising at 2°C is now considered to be “highly dangerous.”10 If uncontrollable global warming—driven by the reduction in the albedo effect (the reflectivity of the earth), the release of methane from the permafrost, and other slow feedbacks—were to take over, human beings would have little choice but simply to try to adapt in whatever ways they could, watching while their own future, and even more that of future generations, evaporated before their eyes.11

Indeed, even the 2°C guardrail approach, Hansen argues, is too conservative. If major sea level rise engulfing islands and threatening coastal cities throughout the world and displacing hundreds millions of people is to be avoided, society needs to aim at reaching 350 parts per million (ppm) of atmospheric carbon (down from the present 400 ppm) by 2100, which would require cutting net carbon emissions by about 6 percent per annum globally.12

As bad as all of this is, it is essential to keep in mind that climate change is only one part of the Great Capitalist Climacteric confronting the world in the twenty-first century—although related to all the others. The world economy has already crossed or is on the brink of crossing a whole set of planetary boundaries, each one of which represents a planetary emergency in its own right, including ocean acidification, loss of biological diversity, the disruption of the nitrogen and phosphorus cycles, disappearance of fresh water, land cover change (particularly deforestation), and growing pollution from synthetic chemicals (leading to biomagnification and bioaccumulation of toxins in living organisms).13 The common denominator behind all of these rifts in the biogeochemical cycles of the planet is the system of capital accumulation on a global scale. This points to the need for truly massive, accelerated social change exceeding in scale not only the great social revolutions of the past, but also the great transformations of production marked by the original Agricultural Revolution and the Industrial Revolution: namely, a twenty-first century Ecological Revolution.

Natural science can take us only so far on these issues. Since the source of the Great Capitalist Climacteric lies in the historical constitution of human society, necessitating a social revolution, we must turn to social science as a guide. Yet, the dominant social science has as its underlying premise—structuring its entire frame of analysis—the notion that the critique of capitalism is off limits. This is so much the case that even the name “capitalism,” as John Kenneth Galbraith pointed out in The Economics of Innocent Fraud, was increasingly replaced in the 1980s by the “meaningless designation” of “the market system.”14 When capitalism is referred to at all today in the mainstream it is as a mere synonym for the watered down notion of a competitive market society, viewed as the end (telos) of human history—both in the sense that all of history is seen as the unfolding of a natural tendency toward market capitalism, and that capitalism itself is “the end of history.”15

The result of such ahistorical thinking is that conventional thought, with only minor exceptions, has virtually no serious social scientific analysis on which to rely in confronting today’s Great Capitalist Climacteric. Those who swallow whole the notion that there is no future beyond capitalism are prone to conclude—in defiance of the facts—that the climate crisis can be mitigated within the present system. It is this social denialism of liberal-left approaches to the climate crisis, and of the dominant social science, that led Naomi Klein to declare in This Changes Everything that “the right is right” in viewing climate change as a threat to capitalism. The greatest obstacle before us, she insists, is not the outright denialism of the science by the far right, but rather the social denialism of the dominant liberal discourse, which, while giving lip service to the science, refuses to face reality and recognize that capitalism must go.16

If conventional social science is crippled at every point by corrupt adherence to a prevailing class reality, the postmodern turn over the last few decades has generated a left discourse that is just as ill-equipped to address the Great Capitalist Climacteric. Largely abandoning historical analysis (grand narratives) and the negation of the negation—that is, the idea of a revolutionary forward movement—the left has given way to extreme skepticism and the deconstruction of everything in existence, constituting a profound “dialectic of defeat.”17

Although some hope is to be found in the Green theory or “ecologism” that has emerged in the context of the environmental movement, such views are typically devoid of any secure moorings within social (or natural) science, relying on neo-Malthusian assumptions coupled with an abstract ethical orientation that focuses on the need for a new, ecocentric world-view aimed at protecting the earth and other species.18 The main weakness of this new ecological conscience is the absence of anything remotely resembling “the confrontation of reason with reality,” in the form of a serious ecological and social critique of capitalism as a system.19 Abstract notions like growth, industrialism, or consumption take the place of investigations into the laws of motion of capitalism as an economic and social order, and how these laws of motion have led to a collision course with the Earth system.

It is therefore the socialist tradition, building on the powerful foundations of historical materialism—and returning once more to its radical foundations to reinvent and re-revolutionize itself—to which we must necessarily turn in order to find the main critical tools with which to address the Great Capitalist Climacteric and the problem of the transition to a just and sustainable society. A period of self-criticism within Marxian theory, commencing in the 1960s and developing over decades, eventually gave rise to a revolution in its understanding of social-ecological conditions. Yet, like most intellectual revolutions the new insights arose only by standing “on the shoulders of giants”—that is, based on the rediscovery and reconstruction of prior understandings, in the face of changing conditions.

By the end of the last century this return to Marx’s ecology had resulted in three crucial scientific breakthroughs: (1) the rediscovery of what could be called Marx’s “ecological value-form analysis”; (2) the recovery and reconstruction of his theory of metabolic rift; and (3) the retrieval of the two types of ecological crisis theory embedded in his analysis. These critical breakthroughs were to generate new strategic insights into revolutionary praxis in the Anthropocene.