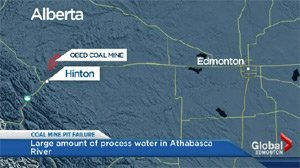 …After a billion litres of coal slurry leaked from the old Obed Mountain mine’s “containment” pond into the Athabasca River without anyone noticing, McQueen assured Albertans, “We have very strict environmental standards in this province, and they’re all being followed.” So “strict” adherence to Alberta’s rigorous environmental standards has resulted in what may be the biggest spill of pollutants in Canadian history. Again we see a complete disconnect between the minister’s words and reality. After water tests of the Athabasca revealed levels of benzo (a) pyrene at four times that of allowable drinking water and mercury levels nine times higher than average, McQueen said, “There are no public health concerns with the water.” But her department advised that people and livestock not drink it…more stories:

Town of Athabasca: Sediment Release from Obed Mountain Mine Site